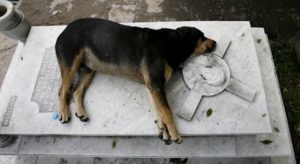 In 2005, Miguel Guzmán decided to purchase a pet dog for his son, a German Shepherd that he named Capitán. Although Capitán might have been meant for his son Damian, the loyal dog quickly took instead to father Miguel.

A week later the Guzmán family, from Cordoba, Argentina, went to visit Miguels grave and were astonished to find the heartbroken dog up at the cemetery where Miguel had been buried, grieving at the gravesite and lying atop his dead owner’s grave and whimpering.

Miguels Guzman’s widow Veronica told Argentina’s Cordoba newspaper: “We searched for him but he had vanished. We thought he must have got run over and died.

The following Sunday we went to the cemetery and Damian recognised his pet. Capitan came up to us, barking and wailing, as if he were crying”.

She added: “We had never taken him to the cemetery so it is a mystery how he managed to find the place. We went back the next Sunday, and he was there again. This time, he followed us home and spent a bit of time with us, but then went back to the cemetery before it started getting dark. I don’t think he wanted to leave Miguel on his own at night.” 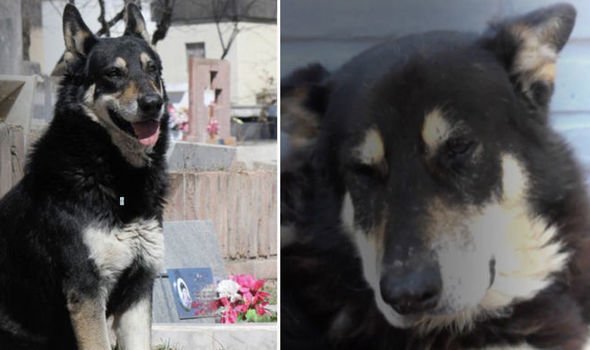 Every Sunday since, the Guzman family has gone to the cemetery to visit both Miguel and Capitán. Although the dog often leaves the cemetery to spend a short period of time with his family, he always returns to the gravesite before dark.

Miguel’s widow was reported to have said “I don’t think he wanted to leave Miguel on his own at night,”.

Cemetery director, Hector Baccega, said that the staff at the cemetery in Villa Carlos Paz, central Argentina are now feeding and taking care of the dog.

“During the day he sometimes has a walk around the cemetery, but always rushes back to the grave. And every day, at six o’clock sharp, he lies down on top of the grave and stays there all night”

Guzman’s son Damian said: “I’ve tried to bring Capitan home several times, but he always comes straight back to the cemetery. I think he’s going to be there until he dies too. He’s looking after my dad.”

Although the Guzman family would dearly love to take Capitán home with them, they understand the dog’s immense loyalty to his best friend.