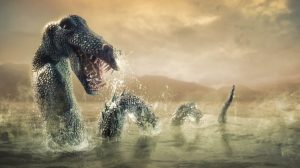 A resident of South Okanagan believes he’s captured on camera evidence of the mythical creature.

Jim La Rocque was with his family at the lakefront property of his mother-in-law when, after hearing a swooshing sound, he spotted something strange moving through the water.

He quickly picked up his phone and recorded in the water an unexplained ripple of waves.

“I’d describe it as like a dragon boat race, like with oars, so if you flipped the dragon boat upside down, you would see all those oars coming out of the water,” he said.

Quite potentially, he may have recorded a partially exposed Ogopogo in the water. In Canadian folklore, an Ogopogo or Naitaka is referred to as lake spirit.

This sort of lake monster has been seen before and is supposedly residing within Okanagan Lake, British Columbia, Canada.

Ogopogo has been allegedly seen by First Nations people since the 19th century. The most common description of Ogopogo is a 40 to 50-foot-long (12 to 15 m) sea serpent resembling an extinct Basilosaurus or Mosasaurus.

You can see below a local news report featuring the footage he caught.

Relics Of Lost Continents Found Beneath The Antarctic Ice