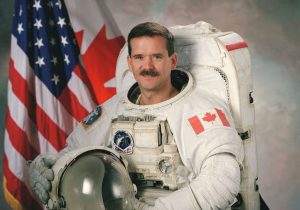 Hadfield had a definitive answer on the question of whether alien lifeforms were to blame for the strange events. You’re an idiot, he adds, if you think they’re aliens.

“Obviously, I’ve seen countless things in the sky that I don’t understand,” Hadfield told the Canadian broadcaster. The retired astronaut also was a pilot for both the Royal Canadian Airforce and US Navy.

“But to see something in the sky that you don’t understand and then to immediately conclude that it’s intelligent life from another solar system is the height of foolishness and lack of logic,” he added.

Other analysts have speculated that the mystery sightings may be the work of enemies, implying that countries such as Russia or China are infiltrating US airspace with cutting-edge technology.

Even if aliens aren’t behind the UFOs, Hadfield believes we shouldn’t rule out the idea that we aren’t alone in the cosmos.

“But definitively up to this point, we have found no evidence of life anywhere except Earth, and we’re looking,” he told the CBC.