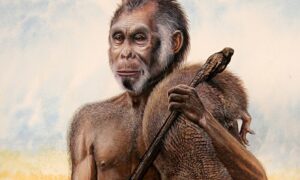 A controversial new book claims that the hobbit-like Homo floresiensis may not actually be extinct.

Evidence of the existence of the mysterious “hobbits” on Flores, an island in Indonesia, was first discovered in a cave back in 2003 – a discovery that has been the subject of much controversy and controversy since.

Called Homo floresiensis, these pint-sized hominids are now thought to be a previously unknown species of human that went extinct sometime around 60,000 years ago, however not everyone is sure.

According to retired anthropologist Gregory Forth of the University of Alberta, these actual hobbits may not have died out at all and may still be living on Flores Island.

Specifically, he cites reports that people on the island saw a “man-ape” as potential evidence that these long-lost human ancestors may still thrive there.

“We just don’t know when this species went extinct, or even dare to say if it went extinct,” he told Live Science. “So there’s some possibility that it’s still alive.”

However, not everyone in the scientific community agrees with his theory.

Some, such as paleoanthropologist John Hawkes, have emphasized the fact that the island is home to about two million people.

The idea that an entire community of prehistoric hominids could have continued to survive there undetected seems far-fetched to say the least.

“In fact, the idea that there is a large primate on this island that is not observed and that survives in a population that can support itself is pretty close to zero,” he said.

The so-called “hobbits or Floresian Man” is a dwarf species of ancient people, whose remains were discovered in 2003 in a cave on the island of Flores in Indonesia. Their height did not exceed 1 meter (3.2 ft) and they are believed to have died out about 12-13 thousand years ago.

The brain of “hobbits” was so small compared to the size of the brain of a modern person that it was more similar in size to the brain of primitive australopithecines that lived 4 million years ago.

Other parts of their bodies also turned out to be very archaic. At the same time, the “hobbits” made stone tools and apparently knew fire.

Of the famous and titled scientists, Gregory Fort is perhaps the most significant person among those who believe that the “hobbits” are Ebu Gogo and that they did not die out millennia ago, but survived to our present day.