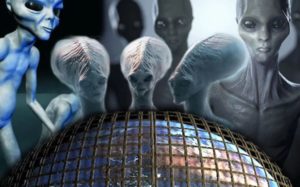 The zoo hypothesis speculates on the assumed behavior and existence of technically-advanced extraterrestrial life and the reasons they refrain from contacting Earth.

It is one of many theoretical explanations for the Fermi paradox. The hypothesis is that alien life intentionally avoids communication with Earth, and one of its main interpretations is that it does so to allow for natural evolution and sociocultural development, avoiding interplanetary contamination, similarly to people observing animals at a zoo.

The hypothesis seeks to explain the apparent absence of extraterrestrial life despite its generally accepted plausibility and hence the reasonable expectation of its existence.

Alternatively, a reluctance to initiate contact could reflect a sensible desire to minimize risk. An alien society with advanced remote-sensing technologies may conclude that direct contact with neighbors confers added risks to oneself without an added benefit.

The zoo hypothesis assumes, first, that whenever the conditions are such that life can exist and evolve, it will, and secondly, there are many places where life can exist (i.e. that there are a large number of alien cultures in existence).

It also assumes that these aliens have great reverence for independent, natural evolution and development.

In particular, assuming that intelligence is a physical process that acts to maximize the diversity of a system’s accessible futures, a fundamental motivation for the zoo hypothesis would be that premature contact would “unintelligently” reduce the overall diversity of paths the universe itself could take.

These ideas are perhaps most plausible if there is a relatively universal cultural or legal policy among a plurality of extraterrestrial civilizations necessitating isolation with respect to civilizations at Earth-like stages of development.

In a universe without a hegemonic power, random single civilizations with independent principles would make contact. This makes a crowded Universe with clearly defined rules seem more plausible.

If there is a plurality of alien cultures, however, this theory may break down under the uniformity of motive concept because it would take just a single extraterrestrial civilization to decide to act contrary to the imperative within our range of detection for it to be undone, and the probability of such a violation increases with the number of civilizations.

This idea, however, becomes more plausible if all civilizations tend to evolve similar cultural standards and values with regard to contact much like convergent evolution on Earth has independently evolved eyes on numerous occasions, or all civilizations follow the lead of some particularly distinguished civilization, such as the first civilization among them.

The Fermi paradox, named after Italian-American physicist Enrico Fermi, is the apparent contradiction between the lack of evidence for extraterrestrial civilizations and various high estimates for their probability.

With this in mind, a modified zoo hypothesis becomes a more appealing answer to the Fermi paradox. The time between the emergence of the first civilization within the Milky Way and all subsequent civilizations could be enormous.

Monte Carlo simulation shows the first few inter-arrival times between emergent civilizations would be similar in length to geologic epochs on Earth. Just what could a civilization do with a ten-million, one-hundred-million, or half-billion-year head start?

Even if this first grand civilization is long gone, their initial legacy could live on in the form of a passed-down tradition, or perhaps an artificial life form dedicated to such a goal without the risk of death.

Beyond this, it does not even have to be the first civilization, but simply the first to spread its doctrine and control over a large volume of the galaxy.

If just one civilization gained this hegemony in the distant past, it could form an unbroken chain of taboo against rapacious colonization in favour of non-interference in those civilizations that follow. The uniformity of motive concept previously mentioned would become moot in such a situation.

If the oldest civilization still present in the Milky Way has, for example, a 100-million-year time advantage over the next oldest civilization, then it is conceivable that they could be in the singular position of being able to control, monitor, influence or isolate the emergence of every civilization that follows within their sphere of influence.

This is analogous to what happens on Earth within our own civilization on a daily basis, in that everyone born on this planet is born into a pre-existing system of familial associations, customs, traditions and laws that were already long established before our birth and which we have little or no control over.