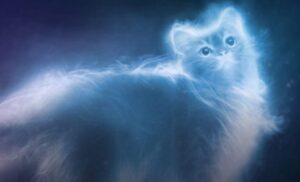 After one of Sandy’s cats passed away, she spent the next few months mourning the loss. She’s always had cats as pets, but Gremlin was special. She had a strong bond with the black and brown tabby that went beyond normal human pet companionship. He often sat on her shoulder and kneaded his paws into her shoulder muscles, giving her a massage.

His memory didn’t fade over the next few years though. She still found herself thinking about him frequently, missing him much as she would have missed a human family member who had died. She was both surprised and stunned when he came back to visit five years after his passing in ghost form. 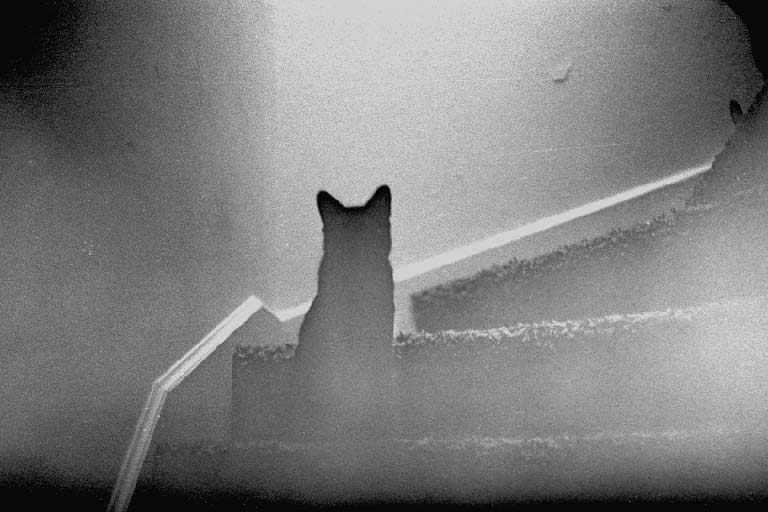 She was sitting on the couch in her sunroom, when she felt the familiar sensation of a cat jump onto her shoulder. She turned to look, but nothing was there. Seconds later, she felt invisible paws kneading into her shoulder muscles. Gremlin was back.

She went on to experience this in her bedroom, as well. Gremlin was a solid cat, and when he jumped up on her bed, it caused the entire bed to rock.

He would then walk around the bed, circling her as she sat reading, purring loudly. When this happened shortly after her experience in the sun room, she knew it was Gremlin paying another visit.

According to psychic medium Jessica Arael Morrocco, the answer is yes.

“When they pass over, as we humans do, their spirit often can be seen by mediums playing around their owner. I have experienced numerous incidences of this nature.

“I simply describe the dog and they will tell me who that is. To the surprise of many, it is not always the specific animal you are looking for. It could be a childhood pet or a pet of a relative who enjoys your company while they are in the afterlife.

“Here is something else to ponder, they re-incarnate just as we do. This is another sign of their eternal existence. The cat or dog can even come back as another animal, as well. I have discovered that during mediumship sessions with people.

“Some people talk about the rainbow bridge, a beautiful luminescent bridge where the animal is greeted on the other side by a relative or guardian.

“ They have a soul but it remains in a place of innocence, similar to a child’s, where there is love without judgement. The universe cares for these animals. They are our gifts and are here to assist us in our journey. We should always take good care of them.”

Animals do reincarnate, but they aren’t reborn into human form until a certain level of awareness is reached. All souls have the ability to progress and humans can help their pets reach this next level.

Love is the highest vibration and by showing it to our pets, we bring them closer to self-awareness, making them feel special and deserving of our love.

Give the pet a role in the household to reinforce it’s self-worth. Some people believe that animals are more spiritually evolved than people. While we are driven by motives and priorities, animals have a purer motive. Their actions are based on need, not driven by ego.

Pets who appear in ghost form haven’t reincarnated yet and are simply returning to pay a visit to their grieving owners. They will often give us subtle signs of their existence by exhibiting similar behavior to when they were alive.

If a dog used to climb onto a couch with you, you might feel the cushions beside you depress. If your cat once knocked items off your counter, you very well might find objects in your house rearranged.

Want to see proof of their ghost existence? Click on the link below to watch a video of a ghost cat captured on film at the haunted Shanley Hotel in Napanoch, New York.

Can your living pets see the other pets in ghostly form?

It’s very possible. Your pet’s vision is vastly different from ours. It is geared towards the movement to assist them in hunting, also allowing them to see better in low-light situations.

Cats also have a better grasp on colors at the red end of the spectrum, allowing them to differentiate between blues and violets better than we can. Since many paranormal investigators believe that ghosts appear in an ultraviolet light spectrum, this gives the theory more relevance.

Pets also have better hearing than we do, which means they might also be able to hear their ghostly counterparts too.

A dog can typically detect sounds that are well beyond the spectrum of human hearing. While humans typically hear sounds from 12Hz to 20,000 Hz, a dog can hear nearly four times greater, in the 40Hz to 60,000 Hz range.

Since Gremlin’s unexpected return, Sandy has been visited by several of her other cats, as well, alerting her in their own unique ways to let her know they’re still with her.