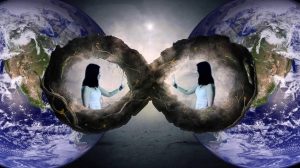 Since the 1920s physicists have been haunted by a problem that sounds like something only discussed in science fiction.

When they try to find the exact location of an atomic particle it appears to wink in and out of existence and appears in multiple locations. Physicists have until recently ignored the question of where are the particles when they wink between locations?

The question was ignored because the only answer that seemed to work was parallel universes or alternate realities as they are sometimes called. When the idea of parallel universes was first suggested it was dismissed as too fanciful to be taken seriously by mainstream scientists for decades, but thanks to the quest for The Theory of Everything that would change. The idea that once was the domain of mystics and a plot device for science fiction would become an accepted fact by physicists.

The long journey to find The Theory for Everything began with Albert Einstein. Towards the end of his life, Einstein devoted himself to the creation of a single, elegant theory that summed up everything in the universe, from the largest event possible, to the smallest.

Einstein never achieved his goal, but ever since his death on April 18, 1955, physicists have been mesmerized by the possibility.

For decades one theory after another failed and then in the 1980s an incredible idea surfaced. Particle physicists had always believed that everything, including atoms, was made of incredibly small particles. What they came to realized is the particles they had been studying for decades are actually tiny, one-dimensional strings.

The current string theory postulates 11 dimensions and is called M-Theory. What the M stands for appears to be a matter of taste but to most physicists it stands for membrane. The membrane or 11th dimension defies common sense.

The 11th dimension is both infinitely long, but only trillionth of a millimeter across. It is in this strange dimension our entire universe floats and most amazing of all an infinite number of other parallel universes.

Recall now how physicists were puzzled by how atomic particles appeared to wink in and out of existence. They now believe that matter travels across the 11th dimension appearing for brief moments in an infinite number of parallel universes.

It’s a frightening concept that everything we are made of is traveling along this 11th dimension and appearing in an infinite number of other universes.

Is it possible for entire objects not just particles to randomly travel between parallel universes? Is this what UFOs, extraterrestrials, ghost and cryptids like Bigfoot are? This would explain why physical evidence is impossible to obtain no matter how credible the witness. The evidence has simply returned to the universe it came from.

Jerusalem Syndrome: Travelling To The Holy City Can Send You Mad