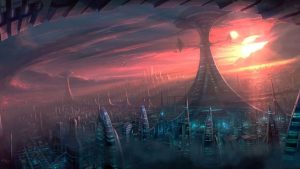 The easiest way to find intelligent life on another planet is to look at it with a telescope. If it was possible to register light in the range characteristic of artificial sources, it is likely that these are cities and buildings of an alien civilization.

One of the likely candidates for the search for extraterrestrial life is Proxima b. This exoplanet orbits Proxima Centauri, a red dwarf 4.24 light years from Earth. The resolution of modern space telescopes, even at such a distance, is not enough, notes the Universe Today portal.

At the same time, the more powerful James Webb Space Telescope (JWST) is being prepared for launch – it is planned to be launched into orbit after October 31, 2021.

Eliza Tabor of Stanford University and Abraham Loeb of Harvard decided to use a mathematical model to test whether JWST could see the light of a hypothetical civilization on Proxima b.

Their calculations showed that if the illumination of the exoplanet’s night side reaches a level of 5% of natural daylight, then JWST will be able to determine the artificial origin of light with a probability of 85%.

For comparison, at the present stage of human development, this figure is only 0.001%. From the orbit of Proxima b, the light from Earth cities cannot be distinguished with such an instrument.

More powerful next-generation telescopes, slated to be launched into orbit by 2035, may prove more effective in finding possible extraterrestrial civilizations.

Calculations by astronomer Thomas Beatty of the University of Arizona show that the promising space telescopes LUVOIR and HabEx can theoretically see the lights of alien civilization at a distance of up to 10 parsecs.

The parsec is a unit of length used to measure the large distances to astronomical objects outside the Solar System, approximately equal to 3.26 light-years or 30.9 trillion kilometres (19.2 trillion miles).