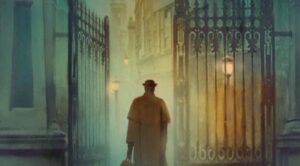 The Campden Mysteries is an event when a man (William Harrison) thought murdered from Chipping Campden, Gloucestershire return to England.

In 1660, William Harrison, was steward to the Viscountess Campden, in Chipping Campden, Gloucestershire, a single-streeted town among the Cotswold hills. The lady did not live in Campden House, whose owner burned it in the Great Rebellion, to spite the rebels; as Castle Tirrim was burned by its Jacobite lord in the 1615.

Harrison inhabited a portion of the building which had escaped destruction. He had been for fifty years a servant of the Hickeses and Campdens, his age was seventy (which deepens the mystery), he was married, and had offspring, including Edward, his eldest son. 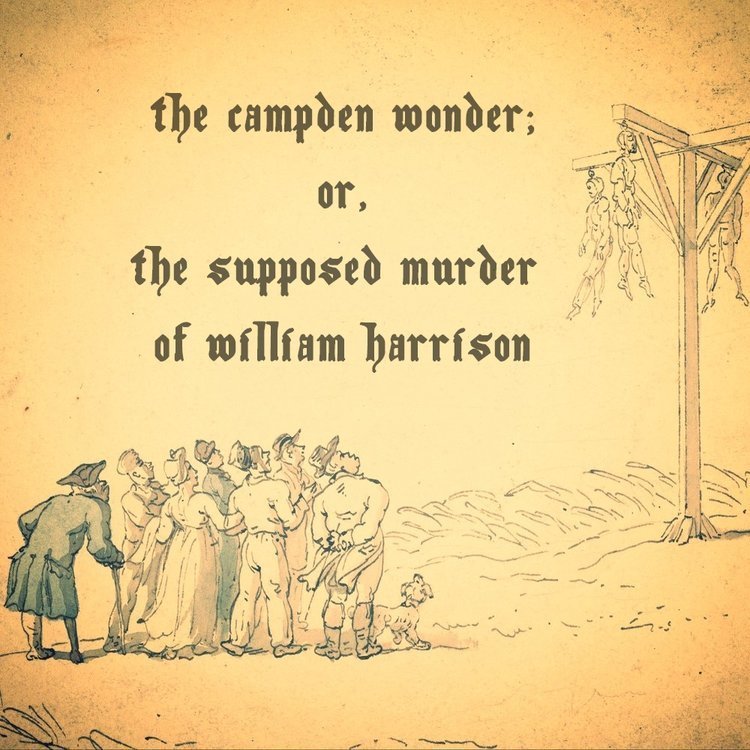 On a market day, in 1659, Mr. Harrison’s house was broken into, at high noon, while he and his whole family were ‘at the Lecture,’ in church, a Puritan form of edification. A ladder had been placed against the wall, the bars of a window on the second story had been wrenched away with a ploughshare (which was left in the room), and the Lady Campden’s money were stolen.

The robber was never discovered–a curious fact in a small and lonely village. The times, however, were disturbed, and a wandering Cavalier or Roundhead soldier may have ‘cracked the crib.’

Not many weeks later, Harrison’s servant, Perry, was heard crying for help in the garden. He showed a ‘sheep-pick,’ with a hacked handle, and declared that he had been set upon by two men in white, with naked swords, and had defended himself with his rustic tool.

It is curious that Mr. John Paget, a writer of great acuteness, and for many years police magistrate at Hammersmith, says nothing of the robbery of 1659, and of Perry’s crazy conduct in the garden.

Perry’s behaviour there, and his hysterical invention of the two armed men in white, give the key to his character. The two men in white were never traced, but, later, there was three men not less flagitious, and even more mysterious. They appear to have been three ‘men in buckram.’

On August 16, 1660. Harrison left his house in the morning and walked the two miles to Charringworth to collect his lady’s rents. The autumn day closed in, and between eight and nine o’clock old Mrs. Harrison sent the servant, John Perry, to meet his master on the way home. Lights were also left burning in Harrison’s window.

That night neither master nor man returned, and it is odd that the younger Harrison, Edward, did not seek for his father till very early next morning: he had the convenience, for nocturnal search, of a moon which rose late. In the morning, Edward went out and met Perry, returning alone: he had not found his master. The pair walked to Ebrington, a village half way between Campden and Charringworth, and learned that Harrison had called, on the previous evening, as he moved home through Ebrington, at the house of one Daniel.

The hour is not given, but Harrison certainly disappeared when just beyond Ebrington, within less than a mile from Campden. Edward and Perry next heard that a poor woman had picked up on the highway, beyond Ebrington, near some whins or furze, a hat, band, and comb, which were Harrison’s; they were found within about half a mile of his own house. The band was bloody, the hat and comb were hacked and cut. Please observe the precise words of Sir Thomas Overbury, the justice who took the preliminary examinations:

‘The Hat and Comb being hacked and cut, and the Band bloody, but nothing more could there be found.’

Therefore the hat and comb were not on Harrison’s head when they were hacked and cut: otherwise they must have been blood-stained; the band worn about the throat was bloody, but there was no trace of blood on the road. This passage contains the key to the puzzle.

On hearing of the discovery of these objects all the people rushed to hunt for Harrison’s corpse, which they did not find. An old man like Harrison was not likely to stay at Charringworth very late, but it seems that whatever occurred on the highway happened after twilight.

Suspicion fell on John Perry, who was haled before the narrator, Sir Thomas Overbury, J.P. Perry said that after starting for Charringworth to seek his master on the previous evening, about 8.45 P.M., he met by the way William Reed of Campden, and explained to him that as he was timid in the dark he would go back and take Edward Harrison’s horse and return. Perry did as he had said, and Reed left him ‘at Mr. Harrison’s Court gate.’

Perry dallied there till one Pierce came past, and with Pierce (he did not say why) ‘he went a bow’s shot into the fields,’ and so back once more to Harrison’s gate. He now lay for an hour in a hen house, he rose at midnight, and again–the moon having now risen and dispelled his fears–he started for Charringworth.

He lost his way in a mist, slept by the road-side, proceeded in the dawn to Charringworth, and found that Harrison had been there on the previous day. Then he came back and met Edward Harrison on his way to seek his father at Charringworth.

Perry’s story does not make sense at all, but Reed, Pierce, and two men at Charringworth corroborated as far as their knowledge went. Certainly Perry had been in company with Reed and Pierce, say between nine and ten on the previous night.

Now, if evil had befallen Harrison it must have been before ten at night; he would not stay so late, if sober, at Charringworth. Was he usually sober? The cool way in which his wife and son took his absence suggests that he was a late-wandering old boy. They may have expected Perry to find him in his cups and tuck him up comfortably at Charringworth or at Ebrington.

Till August 24 Perry was detained in prison, or, odd to say, at the inn! He told various tales; a tinker or a servant had murdered his master and hidden him in a bean-rick, where, on search being made. Harrison, and the rents he had collected, were vanished in the azure. Perry now declared that he would tell all to Overbury, and to no other man.

To him Perry averred that his mother and brother, Joan and Richard Perry, had murdered Harrison! It was his brother who, by John Perry’s advice and connivance, had robbed the house in the previous year, while John ‘had an alibi,’ being at church. The brother, said John, buried the money in the garden. It was sought for, but was not found. His story of the ‘two men in white,’ who had previously attacked him in the garden, was a lie, he said.

He went on with his fables. His mother and brother, he declared, had often asked him to tell them when his master went to collect rents. He had done so after Harrison started for Charringworth on the morning of August 16. John Perry next gave an account of his expedition with his brother in the evening of the fatal day, an account which was incompatible with his previous tale of his doings and with the authentic evidence of Reed and Pierce.

Their honest version destroyed Perry’s new falsehood. He declared that Richard Perry and he had dogged Harrison, as he came home at night, into Lady Campden’s grounds; Harrison had used a key to the private gate. Richard followed him into the grounds; John Perry, after a brief stroll, joined him there and found his mother (how did she come thither?) and Richard standing over the prostrate Harrison, whom Richard incontinently strangled. They seized Harrison’s money and meant to put his body ‘in the great sink by Wallington’s Mill.’

John Perry left them, and knew not whether the body was actually thrown into the sink. In fact in the sink, any more than in the bean-rick. John next introduced his meeting with Pierce, but quite forgot that he had also met Reed, and did not account for that part of his first story, which Reed and Pierce had both corroborated. The hat, comb, and band John said that he himself had carried away from Harrison’s body, had cut them with his knife, and thrown them into the highway. Whence the blood on the band came he neglected to say.

On the strength of this impossible farrago of insane falsehoods, Joan and Richard Perry were arrested and brought before Overbury. Not only the ‘sink’ but the Campden fish-pools and the ruinous parts of the house were vainly searched in quest of Harrison’s body.

On August 25 the three Perrys were examined by Overbury, and Richard and the mother denied all that John laid to their charge. John persisted in his story, and Richard admitted that he and John had spoken together on the morning of the day when Harrison vanished, ‘but nothing passed between them to that purpose.’

As the three were being brought back from Overbury’s house to Campden an unfortunate thing happened. John was going foremost when Richard, a good way behind, dropped ‘a ball of inkle from his pocket.’ One of his guards picked it up, and Richard said that it ‘was only his wife’s hair-lace.’

At one end, however, was a slip-knot. The finder took it to John, who, being a good way in front, had not seen his brother drop it. On being shown the string John shook his head, and said that ‘to his sorrow he knew it, for that was the string his brother strangled his master with.’ To this circumstance John swore at the ensuing trial.

The Assizes were held in September, and the Perrys were indicted both for the robbery in 1659 and the murder in 1660. They pleaded ‘Guilty’ to the first charge, as some one in court whispered to them to do, for the crime was covered by the Act of Pardon and Oblivion passed by Charles II at his happy Restoration. If they were innocent of the robbery, as probably they were, they acted foolishly in pleading guilty.

There was no evidence against them for the robbery, except John’s confession, which was evidence perhaps against John, but was none against them. They thus damaged their case, for if they were really guilty of the robbery from Harrison’s house, they were the most likely people in the neighbourhood to have robbed him again and murdered him. Very probably they tied the rope round their own necks by taking advantage of the good King’s indemnity.

They later withdrew their confession, and probably were innocent of the theft in 1659. On the charge of murder they were not tried in September. Sir Christopher Turner would not proceed ‘because the body of Harrison was not found.’ There was no evidence that Harrison was really dead.

In 1662, Harrison returned to England aboard a ship from Lisbon bearing a remarkable story. He claimed to have been abducted from England by pirates and taken abroad. He was transferred to a Turkish ship and sold into slavery near Smyrna in Anatolia (Turkey). Harrison said that after about a year and three quarters his master died. He then went to a port and stowed away on a Portuguese ship, finally returning to Dover by way of Lisbon.

Whether or not Harrison’s marvelous tale was in fact true, it certainly disproved John Perry’s claims that Harrison had been murdered in August 1660. It thus posed a mystery: what made John Perry make such claims?

Source: The Project Gutenberg of Historical Mysteries by Andrew Lang