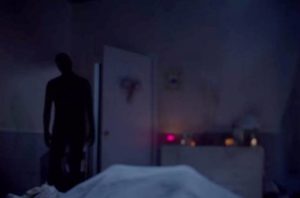 During that Summer my friend invited me to her aunt’s house in New Bedford, MA. A very old whaling town. Her aunt’s house was one of the first houses that had been built when the town was founded.

Her aunt told us many rumors about different houses that were said to be haunted.

She pointed at a structure atop one of the houses. It was some kind of walkway. She said those were called “widow’s walks” named after the women that were left behind when their husbands would go out to sea and never return.

She told us that in some of the houses these restless spirits could be felt and heard…still waiting for their husbands that will never return. Of course, we shrugged this off because we knew she was only trying to scare us. Then, we arrived at the house.

Upon entering the house, you could actually sense presence’s.

Maybe, it was the fact that I have always been sensitive to these things. I don’t know, but you could definitely feel someone else was there the whole time.

During the first couple of nights, everything was pretty peaceful except for the pacing back and forth in the deserted attic. Neither my friend or I brought up the conversation until the very last night we were there.

A few times we would leave the TV on in the living room and when we returned, the TV would be turned off. The kitchen seemed to be another room full of activity. A couple of mornings that we were there, while walking into the pantry for something, the door would shut and no one would be there or the panels on the stove (this was one of those really old stoves, the kind you have to use burning wood) would be arranged so that they would not fit into each other and it was obvious that someone had moved them.

However, during the very last night of our visit, we wanted to get a head start on our traveling plans for the next day.

We retired for the evening rather early. We left the radio on to block out the noises from above.

We turned off all the lights and got into bed. After some time, we were quiet and were about to go to sleep when it happened.

I looked at the doorway of the adjoining bathroom in the room and I saw the dark silhouette of a man leaning on the molding of the doorway. I was shocked, but tried to remain calm. I quietly called out to my friend who was already asleep in the bed next to mine.

She woke up quickly and saw him.

We both began screaming, but her Aunt and Uncle were out of the house and would not return until much later. That night, we slept with not only the radio on, but all the light on as well.

The Cursed Skull of Tunstead Farm