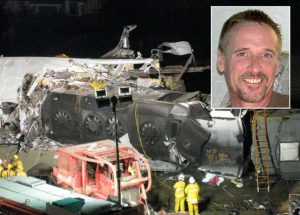 On 12 September 2008 at 4:22 p.m. in California’s San Fernando Valley, a commuter train carrying 225 riders collided with a freight train in what came to be known as the Chatsworth crash, 135 people were injured and 25 died. One of the deceased was 49-year-old Charles E. Peck.

His fiancee heard about the crash from a news report on the radio as she was driving to the train station to pick up her intended. Peck’s parents and siblings joined her. Peck’s body was recovered from the wreckage 12 hours after the accident.

Yet for the first eleven of those hours, his cell phone placed call after call to his loved ones, calling his son, his brother, his stepmother, his sister, and his fiancee. In all, his various family members received 35 calls from his cell phone through that long night.

When they answered, all they heard was static; when they called back, their calls went straight to voice mail.

But the calls gave them hope that the man they loved was still alive, just trapped somewhere in the wreckage.

The barrage of calls prompted search crews to trace the whereabouts of the phone through its signal and to once again look through the wreckage. They finally found Peck’s body about an hour after the calls from his cell phone stopped.

The rescuers said that his body showed no sign that he lived even for a short time after the crash. Charles Peck had died on impact.

Yet long past his death, his cell phone had continued to reach out to many of those he cared most about, and ultimately led rescuers to his mortal remains.