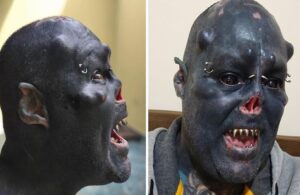 Many people argue that they are in love with The Lord of the Rings, but the tattoo artist from Brazil decided to demonstrate his love for the trilogy in practice.

He made a real orc out of himself. For this, the man was left without a nose and changed the shape of his ears, and his entire body is covered with a dark blue tattoo, reports Daily Mail.

Fernando Franco de Oliveira covered almost 99% of his entire body with tattoos. Eyes were no exception, which now do not have a single bright spot.

The tattoo artist implanted special implants in his head in order to imitate the horns of an orc. The man added that he feels real pleasure from the pain he feels during the procedures.

Fernando additionally made himself a forked tongue, filed his teeth so that they resemble a vampire. At the same time, the man admitted that the most painful procedure that completely changed his whole life was the removal of the nose.

He decided to completely remove this part of the body in order to resemble a skull as much as possible. Despite the lack of a full-fledged nose, a man can breathe without problems.

After the operation to remove the nose, the Brazilian waited a long time for his complete healing. In addition, he had to regularly groom his face to avoid infection.

The tattoo artist added that he is delighted with such processes and always wanted to change outwardly to resemble the orc that everyone saw in the Lord of the Rings movie.

Crashed UFO on the Moon discovered by a researcher