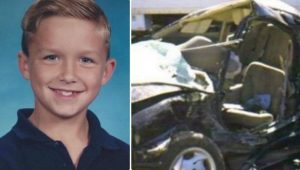 This happened in 1997 in North Carolina (USA). The Whitley family was returning home from church.

Julie was driving, her husband Andy was sitting next to her, and their eight-year-old son Landon was sitting in the back seat.

Andy suddenly screamed at the crossroads. He was the first to see a car fast approaching from the side. The next instant, an ambulance crashed into the family’s car, on the side where Andy and Landon were sitting.

“I did not see the ambulance, but I remember how my husband shouted. And that was the last thing I heard from him, “Julie said in an interview.

Rescuers did not know that in the car, in addition to two adults, there was also a child until they noticed his shoes. They managed to carefully pull the 8-year-old boy out of the wrecked car, although he already looked dead.

Immediately on the spot, the doctors began to provide resuscitation to the boy and managed to start his heart. But on the way to the hospital, he stopped breathing and was in a state of clinical death. He was reanimated again, but in the hospital the boy again “died”. And they saved him again.

After three clinical deaths, doctors were afraid to say something encouraging about the condition of the child. They even told Julie that even if her son survived, he would remain a severely disabled person: he would not be able to walk, talk or even eat because of severe brain damage.

Landon had a traumatic brain injury and spent two weeks in a coma. But then he suddenly woke up and spoke and it turned out that he understood everything and his mental state was not affected.

His words were even more unbelievable when his mother came to him and they began to talk.

“Do you know what happened to your dad?” Julie asked. “Yes, I know, I saw him in heaven.” – suddenly answered the boy.

Then Landon began to colorfully describe how he visited the “golden city” and saw Jesus and the Angels there. And besides his father, he met his friend Olan Palmer and his son Neil there – both died in an accident several years before.

“I remember how we stood on a large square all together. We just stood and were silent,” said the boy, “and I also saw your two children there.”

Julie had two miscarriages before Landon’s birth, a boy and a girl. Landon was never told about this, and as a whole in the family no one ever mentioned this, even by accident in a conversation.

“I know it was my brother and sister, although you did not tell me about them. But in heaven you know everything,” the boy said.

Now Landon is already a man in age and from that accident he only had scars on his head and memories of what he saw during a clinical death. And these memories make his life easier.

“Now I know that there is a Heaven and the angels, too. When you know this, to live is much easier.”

About this story, Landon and his mother wrote a book, “The Road to Heaven,” where it is described in detail what Landon saw. Both are sure that the book will help many who have lost their loved ones, including children.

The soul does not die, but returns to the Universe, scientists say