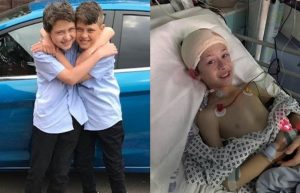 Identical twins are sometimes referred to as clones because they are genetically identical, down to their fingerprints. And it looks like they can also get cancer at the same time, reports staffordshire-live.co.uk.

It is believed that there is some kind of mystical connection between identical twins, that they almost read each other’s thoughts and they have similar habits and character traits.

Doctors generally consider it nonsense that identical twins can at the same time pick up such “non-contagious” diseases as appendicitis, cirrhosis of the liver or oncology. Nevertheless, very controversial cases regularly appear, proving that this problem is much more complicated than it seems.

In 2019, 15-year-old Ben Parton from Cannock, Staffordshire, England, was diagnosed with a cancerous tumor in his brain. Eight months doctors fought for his life, but the boy died.

Barely two weeks after his funeral, his identical twin brother Jack Parton was also diagnosed with cancer, only this time the cancer was not in the form of a tumor in the brain, but a disease of the blood.

The doctors did not immediately give him such a diagnosis, considering at first that Jack was ill due to stress after the death of his brother. But the examination showed leukemia.

“Finding out that my remaining son had leukemia was terrible. Although I had hope that leukemia was curable, while Ben never had such a chance,” says Jack’s mother, 54-year-old Julie Parton.

Ben Parton had glioblastoma, the most aggressive malignant brain tumor. It was identified after the boy began to suffer from frequent headaches with bouts of vomiting. He underwent two surgeries, two courses of chemotherapy and 30 sessions of radiation therapy, but this did not help.

Jack is doing much better. Three years after the start of treatment, he is still alive, his next course of therapy was completed the other day, and he feels well.

This is a very curious precedent from the point of view of medicine, showing how cancer developed differently in two identical biological organisms, probably depending on random cell mutations and where bad cells could go in the body.

But the fact that the cells of the twins began to “mutate” into cancer almost simultaneously, with a difference of only a few months, is alarming.

In 2 months, mysterious SOMETHING killed about 60 cows in Colorado