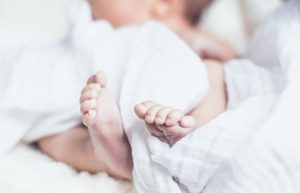 In the maternity hospital of Norilsk, Russia, an unusual boy named Stepan Bazheev was born. According to the stories of obstetricians, the child said the word “father” a few minutes after the birth, and after a while, the word “mother”.

It is noted that the process of pregnancy took place at 17-year-old Liza Bazheeva without any problems. The boy was born healthy and strong. Doctors did not even have time to inform the young mother of the sex of the child and his data, as he said the first words.

And already at home, when mom was playing with the child and told him that the father should arrive soon, the newborn said: “Who, dad?”

It is known that in the womb, children already hear the speech of their parents. Newborn parents, Liza and Rodion knew this, so they regularly tried to develop the baby. Rodion read fairy tales, sang songs with a guitar, and his mother included classical music.

Perhaps the key to the phenomenon lies in loving parents. By the way, Rodion is an athlete, a coach and just a spiritually developed person. Mother also does not lag behind him.

On the Internet, some people attributed the baby to the indigo children. Others noted that this is an accident and over time, the speed of development will return to normal.