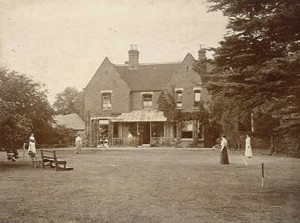 Borley Rectory was a Victorian mansion that gained fame as “the most haunted house in England”. Built in 1862 to house the rector of the parish of Borley and his family, it was badly damaged by fire in 1939 and demolished in 1944.

Local legend says that a monk tried to run away with a nun from the nearby Bures nunnery. Despite having an escape plan organised and a carriage ready to smuggle them away to safety, the two lovers were caught.

The monk was hanged, and the nun was bricked up in the walls of the monastery’s cellars. The modern legend began in 1862, when Reverend Henry Bull became rector of Borley and built the rectory a year later in 1863. Villagers knew of the mournful nun who could be seen, walking sadly round the land near the old monastery – and it seems Reverend Bull grew accustomed to her too.

In 1875 he added a new wing to the rectory overlooking what was known in the village as the ‘Nun’s Walk’ so that he could watch the ghost. However, the nun eventually became an annoyance, particularly as she had a habit of staring in the windows of the rectory, scaring many visitors. Henry Bull died in May 1892 in the Blue Room of the rectory.

His son Harry took over the building and, if anything, the tales of haunted happenings increased. Four of Henry’s sisters saw the nun walking along her path, and in addition to the nun apparition, there were new sightings of a ghostly coach and horses arriving in the rectory drive. Harry Bull died in June 1927, also in the Blue Room; before his death he is claimed to have said he had experienced ‘communications with spirits’, but his passing marked the end of the Bulls’ physical, earthly tenancy with the rectory.

In October 1928 the Reverend Guy Eric Smith and his wife took over residency of the rectory. The Smiths knew about the house’s history and soon began experiencing their own strange phenomena. Objects were moved around the house, lights were switched on and off, stones were thrown, there was even the sound of strange whispers mentioning Henry Bull’s nickname – Carlos.

The Smiths finally wrote to the Daily Mirror for help, and the paper dispatched the paranormal investigator, Harry Price, to the rectory. Price recorded incidents of many unusual activities including inexplicable bell ringing and the strange appearance of a Catholic medallion.

The Smiths moved out of the building and then left Borley altogether in April 1930, but the October of that year saw the start of a period Harry Price would refer to as ‘the most extraordinary and best documented case of haunting in the annals of psychical research’. Reverend Lionel Foyster, his young wife Marianne and their adopted daughter Adelaide moved into the rectory and immediately the phenomena worsened.

Marianne faced the worst of the poltergeist attacks – objects were thrown at her, and messages addressed to her appeared scribbled across the walls. One message read, ‘Marianne, please help get. Pleas for help and prayers’.

The Reverend Foyster decided to have the rectory exorcised and things settled down for a short time, although the hauntings returned and Marianne was repeatedly thrown from her bed by spiritual forces. Reverend Foyster finally decided to move his family away from the area, and all subsequent rectors have refused to live in the house.

By June 1937 Harry Price himself decided to rent the building and installed a team of observers. On 27th March 1938 a séance was held in the rectory. A spirit voice said the rectory would catch fire in the hallway, that very night and burn down. It did not. Price’s tenancy expired and the house was taken over by Captain William Gregson and his wife.

On 27th February 1939 Captain Gregson was in his library when a lamp in the hallway fell over. Eleven months later than the spirits warned, Borley Rectory burnt to the ground. Witnesses saw strange apparitions dancing in the flames, and the nun’s face was said to be seen staring from an upper window. Before the rectory was razed in 1944, Price returned to the site and was hunting in the cellars when he found the jawbone of a young woman. He believed it belonged to the infamous nun, and gave it a Christian burial. However, it has not stopped the strange occurrences and many locals now believe the spirits inhabit the Borley church and churchyard across the road.