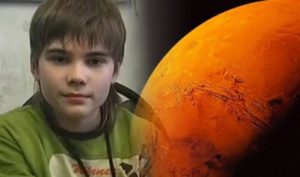 Sometimes, some children are born with quite fascinating talents, unusual abilities.

I was told the story of an unusual boy named Boriska from members of an expedition to the anomaly zone located in the north of the Volgograd region, most commonly referred to as “Medvedetskaya gryada”…

“Can you imagine, while everyone was sitting around the campfire at night, some little boy (about 7 years of age) suddenly asked everyone’s attention. Turned out, he wanted to tell them all about life on Mars, about its inhabitants and their flights to earth,” shares one of the witnesses.

Silence followed. It was incredible! The little boy with gigantic lively eyes was about to tell a magnificent story about the Martian civilization, about megalithic cities, their spaceships and flights to various planets, about a wonderful country Lemuria, life of which he knew in details since he happened to descend there from Mars, had friends there…

Logs were cracking, night’s fog enveloped the area and the immense dark sky with myriads of brightly lit stars seemed to conceal some sort of a mystery. His story lasted for about an hour and a half. One guy was smart enough to tape the entire narration.

Many were stunned by the two distinctive factors. First of all, the boy possessed exceptionally profound knowledge. His intellect was obviously far from that of a typical 7-year-old.

Not every professor is capable of narrating the entire history of Lemuria and Lemurians and its inhabitants in such details. You will be unable to find any mentioning of this country in school textbooks. Modern science has not yet proved existence of other civilizations.

Second of all, we were all amazed by the actual speech of this young boy. It was far from the kind kids his age usually use. His knowledge of specific terminology, details and facts from Mars’ and Earth’s past fascinated everyone.

“Why did he start the conversation in the first place,” said my interlocutor. “Perhaps, he was simply touched by the overall atmosphere of our camp with many knowledgeable and open-minded people,” continued he.

“Could he make this all up?”

“Doubtful”, objected my friend”. “To me this looks more like the boy was sharing his personal memories from past births. It is virtually impossible to make up such stories; one really had to know them.”

Today, after meeting with Boris’ parents and getting to know the boy better, I begin to carefully sort out all the information obtained around that campfire. He was born in Volzhskii town in a suburban hospital, even though officially, based on the paperwork, his birthplace is the town of Zhirnovsk of Volgograd region. His birthday is January 11th, 1996. (Perhaps it will be helpful for astrologers).

His parents seem to be wonderful people. Nadezhda, Boriska’s mother, is a dermatologist in a public clinic. She graduated from Volgograd medical institute not so long ago in 1991. The boy’s father is a retired officer. Both of them would be happy if someone could shed the light onto the mystery behind their child. In the meantime, they simply observe him and watch him grow.

-After Boriska was born, I noticed he was able to hold his head in 15 days, recalls Nadezhda. His first word “baba” he uttered when he was 4 months old and very soon afterward started talking. At age 7, he constructed his first sentence, “I want a nail.” He said this particular phrase after noticing a nail stuck in the wall. Most notably, his intellectual abilities surpassed his physical ones.

-How did those abilities manifest themselves?

-When Boris was just one year old, I started giving him letters (based on the Nikitin’s system) and guess what, at 1,5 he was able to read large newspaper print. It didn’t take long for him to get acquainted with colors and their shades. He began to paint at 2.

Then, soon after he turned 2, we took him to the children day care center. Teachers were all stunned by his talents and his unusual way of thinking. The boy possesses exceptional memory and an unbelievable ability to grasp new information. However, his parents soon noticed that their child had been acquiring information in his own unique way, from some place else…

-No one has ever taught him that, recalls Nadya. But sometimes, he would sit in a lotus position and start all these talks. He would talk about Mars, about planetary systems, distant civilizations…we couldn’t believe our own ears. How can a kid know all this? Cosmos, never-ending stories of other worlds and the immense skies, are like daily mantras for him since he was 2.

It was then that Boriska told us about his previous life on Mars, about the fact that the planet was in fact inhabited, but as a result of the most powerful and destructive catastrophe had lost its atmosphere and that nowadays all its inhabitants have to live in underground cities. Back then, he used to fly to earth quite often for trade and other research purposes.

It seems that Boriska piloted his spaceship himself. This was during the times of the Lemurian civilizations. He had a Lemurian friend who had been killed right before his own eyes…

-A major catastrophe took place on earth. A gigantic continent was consumed by stormy waters. Then suddenly, a massive rock fell on aconstruction…by friend was there…, tells Boriska. I could not safe him. We are destined to meet sometime in this life.

The boy envisions the entire picture of the fall of Lemuria as though it happened yesterday. He grieves the death of his best friend as though it was his fault.

One day, he noticed a book in his mother’s bag entitled “Where do we come from?” by Ernst Muldashev. One should have seen the kind of happiness and fascination this discovery triggered in the little boy. He’s been flipping through pages for hours, looking at sketches of Lemurians, photos of Tibet. He then started talking about high intellect of the Lemurians…

-But Lemuria ceased to exist a minimum 800 000 years ago…, I uttered in response to his statements. Lemurians were 9 meters tall! Is that so? How can you remember all this?

-I do remember, replied the boy.

Later, he began recalling another book by Muldashev entitled “In Search of the City of Gods.” The book is mainly devoted to ancient tombs and pyramids. Boriska firmly stated that people will find knowledge under one of the pyramids (not the pyramid of Cheops). It hasn’t been discovered yet.

“Life will change once the Sphinx will be opened,” said he and added that the great Sphinx has an opening mechanism somewhere behind his ear (but he does not remember where exactly). The boy also talks with great passion and enthusiasm about the Mayan civilization. According to him, we know very little about this great civilization and its people.

Most interestingly, Boriska thinks that nowadays the time has finally come for the “special ones” to be born on earth. Planet’s rebirth is approaching. New knowledge will be in great demand, a different mentality of earthlings.

-How do you know about these gifted kids and why this is happening? Are you aware that they are called “indigo” kids?

-I know that they are being born. However, I haven’t met anyone in my town yet. Perhaps may be this one girl named Yulia Petrova. She is the only one who believes me. Others simply laugh at my stories. Something is going to happen on earth; that is why these kids are of importance. They will be able to help people. The Poles will shift. The first major catastrophe with one of the continents will happen in 2009. Next one will take place in 2013; it will be even more devastating.

-Aren’t you scared that your life may also going to end as a result of that catastrophe?

-No. I’m not afraid. I have lived through one catastrophe on Mars already. There still live people like us out there. But after the nuclear war, everything has burnt down. Some of those people managed to survive. They built shelters, new weaponry. There was also a shift of continents there, although the continent was not as large. Martians breathe gas. In case they arrived to our planet, they would have been all standing next to pipes and breathing in fumes.

-Do you prefer breathing oxygen?

-Once you are in this body, you have to breathe oxygen. However, Martians dislike this air, earth’s air, because it causes aging. Martians are all relatively young, about 30-35 years old. The amount of such Martian children will increase annually.

-Boris, why do our space stations crash before they reach Mars?

I was amazed by his knowledge of this sort of radiation “Fabos”. This is absolutely true. Back in 1988 resident of Volzhsky Yuri Lushnichenko, a man with extrasensory powers attempted to warn Soviet leaders about the inevitable crash of the first Soviet space stations “Fobos 1” and “Fobos-2”. He also mentioned this sort of an “unfamiliar” and harmful for the planet radiation. Obviously, no one believed him then.

-What do you know about multiple dimensions? Do you know that one must fly not on straight trajectories, but maneuvering through the multi-dimensional space?

Boriska immediately rose to his feet and started to pour all the facts about UFOs. “We took off and landed on Earth almost momentarily!” The boy takes a chalk and begins drawing an oval object on a blackboard. “It consists of six layers,” he says. 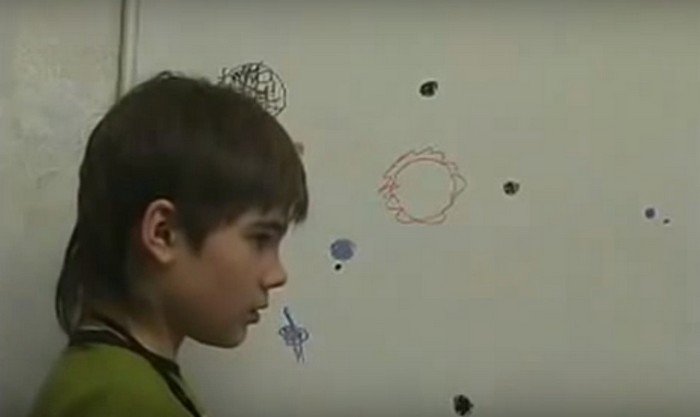 25%–outer layer, made of durable metal, 30%–second layer made of something similar to rubber, the third layer comprises 30%–once again metal. The final 4% is composed of a special magnetic layer. “If we are to charge this magnetic layer with energy, those machines will be able to fly anywhere in the Universe.”

-Does Boriska have a special mission to fulfill? Is he aware of it?- I pose these questions to his parents and the boy himself.

-He says he can guess,- says his mother. He says he knows something about the future of Earth. He says information will play the most significant role in the future…

-Boris, how do you know all this?

-It is inside of me.

-Boris, tell us why do people get sick?

-Sickness comes from people’s inability to live properly and be happy… You must wait for you cosmic half. One should never get involve and mess up other peoples’ destinies. People should not suffer because of their past mistakes, but get in touch with what’s been predestined for them and try to reach those heights and move on to conquer their dreams. (These are the exact words he was using).

You have to be more sympathetic and warmhearted. In case someone strikes you, hug your enemy, apologize yourself and kneel before him. In case someone hates you, love him with all your love and devotion and ask for forgiveness. These are the rules of love and humbleness.

Do you know why the Lemurians died? I am also partially at blame. They did not wish to develop spiritually any more. They went astray from the predestined path thus destructing the overall wholeness of the planet. The Magic’s Path leads to dead end. Love is a True Magic!