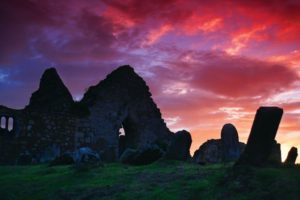 When it comes to ghost stories, the British Isles are a sort of motherland. Misty weather, drafty castles and mysterious ancient ruins combine with an often bloody history to produce some fabulous hauntings.

In Ireland, the ghosts roam a countyside also populated by faerie folk, leprechauns and banshees. There is hardly a square foot on the island that isn’t associated with some form of specter or another. One of the most beautiful haunted spots “Columbus Ghost Tours” found is a relatively obscure location from a tourist perspective: Bonamargy Friary.

Thought to be built in the 1480’s by Third Order Franciscan monks, the friary was meant to serve the McQuillan family but was taken over by their rivals, the MacDonnell family, in 1588. The friary was set on fire during a war with the English around this time, but was restored and in use until sometime around 1640.

Several earls of Ulster are buried here, as well as the remains of the famed chieftain Sorley Boy MacDonnell. In addition to this, an old oaken chest was found on the site in 1822 that contained some works of Thomas de Aquinas dating back to 1338! How these papers came to be here is a mystery.

There is an interesting legend that, after being continually raided, the monks buried the friary’s valuables at a point where the light from a candle placed in the chapel’s east window fades. Nobody heard of anyone successfully locating this treasure, but one legend that is often encountered here is the Black Nun of Bonamargy Friary.

After it became an abandoned place, during the 1640’s, Bonamargy took it’s most famous resident, Julia McQuillan, or as she is more commonly known, the Black Nun. It’s not certain how she earned her nickname, some suspect it was her grimy appearance, others her black habit, and others still think it was her tendency to spout prophecy and live alone in the creepy old monastery that gave her the dark moniker.

Some of her prophecies included the prediction of boats made of iron, horseless carriages and the joining of some well-known area standing stones (which ended up happening during the construction of Ballycastle harbour).

One thing she didn’t foretell was her murder on the 13th step leading to the second story of the friary. While the motive and murderer are lost in history, it is known that the Black Nun requested that she be buried at the main entrance to the chapel so that all who entered would have to trod upon her grave. Her headstone stands out like a worn Celtic cross with a hole in the center.

The Black Nun is seen on the stairwell and wandering the ruins of the friary every so often and local legend says that bad luck will fall on anyone who stands on the 13th step.

Another, more tangible, event happened a few years back when a reporter for the BBC was taking pictures for a story on Bonamargy. As he was preparing to take a photo of the Black Nun’s headstone a visiting family wandered into the shot.

Realizing their intrusion, the family apologized and made a hasty retreat into a dark vaulted passageway. Just as the reporter was taking his picture the family came running back into frame.

Terrified, they explained that as they entered the passage a large stone from the wall flew past, nearly missing them, and crashing to the ground with such force that it shattered into pieces.

Fearing the passage was near collapse, the police were summoned and that section of the friary was closed off. It was during the investigation of the structure that the authorities realized the stone hadn’t fallen from the ceiling, but had somehow popped out of a side wall and flew across the passage as if it had been pushed from behind.

I don’t know if it was Julia or one of the many who died here during raids, but that certainly wasn’t christian-like behaviour.

Another mystery sits just across the road from the friary on a rock a few yards out into the Irish Sea. Separating the rock from the mainland is a dangerous spot of water known as the Devil’s Churn.

The churn is exactly what it sounds like, a vacuum action whirlpool that, during the ebb and flow of the tide, greedily sucks anything that sits on top of the water into the freezing depths. Whoever ventured out to the rock to carve the mysterious face that appears there was certainly taking a gamble.

There are several legends of unrequited love that claim responsibility for the unusual carving – each ending with the heartbroken sculptor throwing themself into the Devil’s Churn, but there is another possible explanation. 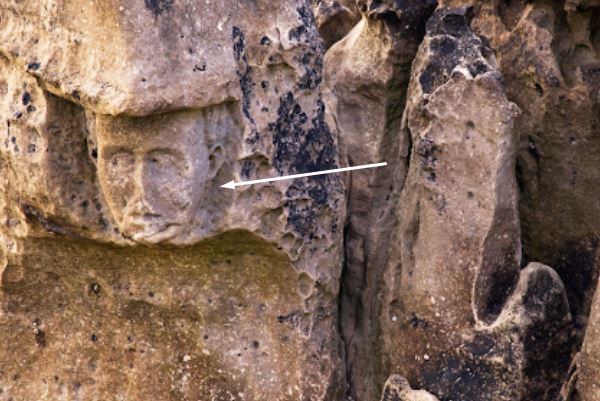 Many village elders recall that the area once had multiple faces carved into the rocks that they claim have eroded over time. History states that, in addition to threats from warring clans and invading British, the monks of Bonamargy would occasionally be attacked by murderous groups of Celts that would toss their sacraficial victims into the Devil’s Churn.

Carving the faces of their lost brothers onto the rock was the monks way of bringing Christianity to the pagan site. Whether it be wind or spirits, haunting wails have been heard here at night.

You can’t really blame someone if they let their imagination run away from them at Bonamargy. The history, mystery and crooked ruins and gravestones meld with the wild landscape to create a truly stunning place that feels connected to the questions that swirl in all our heads when darkness looms near.

Bonamargy Friary also reminds me that, while St. Patrick is largely credited as the one who brought Christianity to Ireland, if that’s something you feel worth celebrating, you really could get away with drinking green beer and listening to the Pogues nearly every day of the week. It was a struggle that was fought by many.