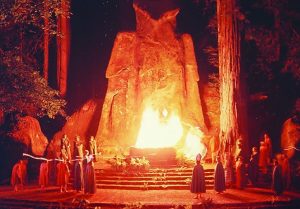 Located in Monte Rio, California, the Bohemian Grove was initially formed in 1872. Today, it remains a very elite club that only allows club members and their guests to enter the 2,700 acre campground.

Though the Club was at one time almost completely shrouded in mystery and mystique, an increasing amount of information has been made available over the years, particularly by those individuals who have infiltrated the camp.

In 1878, the tradition of the summer encampment was introduced after the group enjoyed a festive sendoff party in honor of Henry Edwards, one of the Club’s founding members who was moving to New York City.

From then on, the elite members, including politicians, prominent business leaders, senior media executives, artists, and other men of power, have gathered every July for the 2 to 3 week encampment.

According to a columnist for Vanity Fair who was able to infiltrate the Club for a short period of time during the 1989 encampment, the event primarily consists of powerful men smoking and getting highly intoxicated while peeing in the bushes.

The camp opens with a ceremony known as “The Cremation of Care”, which is intended to make the members relax and let go of the stress that awaits them in the outside world. Interestingly, during the final week of the camp, the members put on the Grove Play, a musical theater production that includes a cast, stage crew, chorus, and orchestra.

Throughout the year, a variety of additional events are held, including the “Spring Jinks” in June and the “Ladies Jinks”, which is especially for wives and other invited guests.

When the Grove is not being used, members do have the ability of scheduling private day events and are allowed full access to the various amphitheaters, campfire pits, and more. However, all women and other guests must be off the premises by 9 or 10 pm. 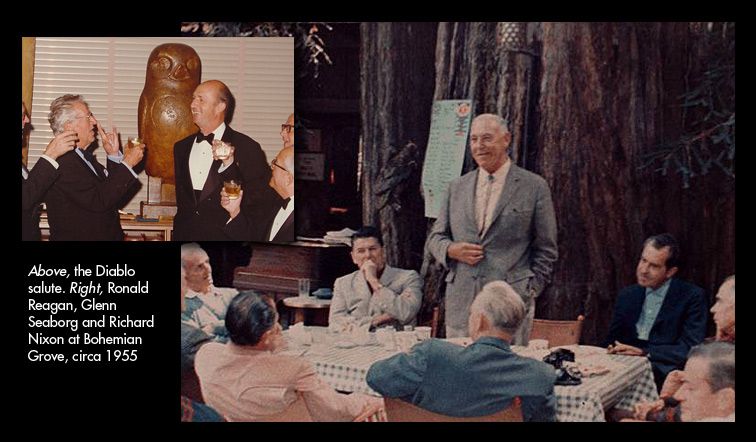 Who Are the Members of Bohemian Grove?

While there is intense secrecy among Bohemian Grove members, the club is believed to be made up of around 2,500 to 2,700 of the world’s richest, most conservative, and primarily white men.

(Although there is a longstanding rumor that they do not allow black or Jewish men into their inner circle, there are reports that former Secretary of State Colin Powell, who is black, is a member.)

There is a waiting list that averages between 15 and 30 years, a $8,500 initiation fee, and a $2,000 yearly fee is required before someone can become a member. After a man has been a member of the Club for 40 years, he earns “Old Guard” status, while gives him reserved seating at talks and several additional perks.

Although the Bohemian Grove does not allow women to join, Queen Elizabeth of Great Britain was allowed to participate in 1983’s summer festivities. In addition, four women were named honorary members, including Sara Jane Lippincott, though they are all dead now. In fact, Ina Coolbrith, a well known poet, was the last female honorary member to die and she passed away in 1928.

The Club Motto and Symbols

The Club’s motto is believed to be “Weaving Spiders Come Not Here.” This is assumed to mean that all business and outside concerns should be left at the door, although it is largely believed that a number of business and political deals have been made at the Grove.

Legend says that he opted for death instead of revealing the queen’s secrets when brought before the Bohemian monarch. Also on the shores of the Grove’s lake, a large wood carving of St. John stands to symbolize the secrecy of the Grove’s members throughout history.

This elite men’s club is often at the center of numerous conspiracy theories.

The most common of these being that the Bohemian Grove is a meeting of the Illuminati. The Illuminati is an alleged worldwide shadow organization that if focused on bringing about a single world government rule by it members.

Next is Satanism. The accusations here derived from the mock sacrifice made to a large Owl idol. This is in fact is well documented, Google “Cremation of Care,” though the accusations of actual human sacrifice are questionable. Along with strange rituals are accusations of sexual perversions of every type imaginable.

While members have made every effort to ensure information about Bohemian Grove does not get out, some details have become available over the years. It remains to be seen if the Bohemian Grove is simply a exclusive men’s club or something more. But there can be no doubt that the world’s most powerful men meeting in secret is troublesome.

The Curse Of Bhangarh: The Most Haunted Place In India