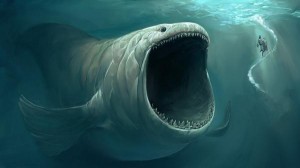 It came from the depths of the South Pacific. Throughout the summer of 1997, a sound never before recorded burst from the abyss. News agencies scrambled; was this some new leviathan, an unknown monster from the deep? Nobody knew, and though this recording has taken its place among the permanent fixtures of the museums of the strange, the Bloop has never been identified.

The Bloop was on the loud side, to be sure. It was picked up on multiple sensors as far as 5,000 kilometers away. By triangulation, we know it came from somewhere right around 50°S, 100°W, which is about 1,750 kilometers west of Chile in the South Pacific. It’s about as remote as you can get in any ocean. There are no islands or anything anywhere near it. The water is deep there, very deep, averaging around 4,300 meters. The Bloop was recorded several times during 1997, on the Eastern Equatorial Pacific autonomous hydrophone array, which was deployed in May, 1996 by NOAA (the National Oceanic and Atmospheric Administration) for long-term monitoring of seismic events on the East Pacific Rise.

Cryptozoologists love the Bloop, because to them it is evidence pointing to the existence of a gigantic unknown creature. Virtually every web page about the Bloop (and there are a lot of them) repeats this same quote, word for word:

Though it matches the audio profile of a living creature, there is no known animal that could have produced the sound. If it is an animal it would have to be huge — much larger than even a Blue whale, according to scientists who have studied the phenomenon.

I’ve been unable to find the original source of this quote. Only one web site on which I found it gave an attribution, saying it was a quote from NOAA. However this text does not appear on any NOAA web sites, and its wording is inconsistent with NOAA’s typical descriptions of unknown sounds. When a sound is unknown, NOAA says it’s unknown and leaves it at that; it is not their habit to editorialize or hypothesize about giant cryptids.

So, for now, the identity of these “scientists who have studied the phenomenon” remains a mystery. Many cryptozoologists have written about the Bloop, as is easily shown by a simple Google search; but from what I could tell, few legitimate zoologists have, and none who have concluded the Bloop has a biological origin.

Fortunately, we are not entirely without our own resources to test this suggestion that the Bloop “matches the audio profile of a living creature”. There are three basic types of sounds in the oceans: Natural sounds like volcanoes and earthquakes, biological sounds from sea creatures, and man-made sounds from boats or other machinery. Usually you can take your unknown sound and compare it to a selection of known sounds, and get a pretty good idea what it is. Sounds can be represented on colorful graphs called spectrograms. Time is one dimension, and frequency is the other.

The amplitude is represented by the color. An ongoing sound with a certain frequency range, like a boat engine, creates a solid band across the spectrogram. A chirp from a dolphin would make a little streak. This gives us a two-pronged approach to trying to match the Bloop to a known source: We can listen to it to get a subjective feel for it, and we can also compare its spectrogram to known spectrograms to get a firmer, more quantifiable comparison.

The frequency of the sound meant it had to be much louder than any recognised animal noise, including that produced by the largest whales.

So is it a huge octopus? Although dead giant squid have been washed up on beaches, and tell-tale sucker marks have been seen on whales, there has never been a confirmed sighting of one of the elusive cephalopods in the wild.

The largest dead squid on record measured about 60ft including the length of its tentacles, but no one knows how big the creatures might grow.

For years sailors have told tales of monsters of the deep including the huge, many-tentacled kraken that could reach as high as a ship’s mainmast and sink the biggest ships. However Phil Lobel, a marine biologist at Boston University, Massachusetts, doubts that giant squid are the source of Bloop.

“Cephalopods have no gas-filled sac, so they have no way to make that type of noise,” he said. “Though you can never rule anything out completely, I doubt it.”

Nevertheless he agrees that the sound is most likely to be biological in origin. The system picking up Bloop and other strange noises from the deep is a military relic of the Cold War.

In the 1960s the U.S. Navy set up an array of underwater microphones, or hydrophones, around the globe to track Soviet submarines. The network was known as SOSUS, short for Sound Surveillance System. The listening stations lie hundreds of yards below the ocean surface, at a depth where sound waves become trapped in a layer of water known as the “deep sound channel”.

Here temperature and pressure cause sound waves to keep travelling without being scattered by the ocean surface or bottom. Most of the sounds detected obviously emanate from whales, ships or earthquakes, but some very low frequency noises have proved baffling.

Scientist Christopher Fox of the U.S. National Oceanic and Atmospheric Administration’s Acoustic Monitoring Project at Portland, Oregon, has given the signals names such as Train, Whistle, Slowdown, Upsweep and even Gregorian Chant.

He told New Scientist that most can be explained by ocean currents, volcanic activity — Upsweep was tracked to an undersea South Pacific mountain that had not been identified as “live.”

But some sounds remain a mystery he says. Like Bloop – monster of the deep?