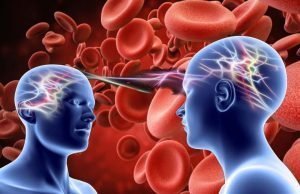 Is it possible to communicate using aspects of blood? And if so has it been a known method used for a long time in many times and cultures?

“We few, we happy few, we band of brothers. For he today that sheds his blood with me, Shall be my brother; be ne’er so vile, the day shall gentle his condition. And Gentlemen in England now abed, Shall think themselves accursed they were not here, And hold their manhood’s cheap; whiles any speaks, That fought with us upon Saint Crispin’s day.” – William Shakespeare (King Henry V)

Perhaps Shakespeare had occult contacts in his day and knew what many occultists and alchemists knew about what they called “blood telegraphy.” Blood Telegraphy is defined by those versed in Hermetic writings as a way of using blood, particularly via blood rites and blood oaths as a means to communicate with other people with whom blood has been shared and exchanged.

It is conceivable that this form of communication was discovered by men covered in blood during battles and coming into physical contact with one another while bleeding. They may have found after bleeding on one another, that later they were able to know what was happening to one another via a kind of psychic biological linkage.

This arcane knowledge soon became the subject of many secret texts. One such text is the Steganologia(from the Greek: steganos = hidden, and logos = knowledge; hence the meaning is “secret knowledge”), a rare book referred to by the Rosicrucian Dr. Johannes Staricius.

Staricius wrote a text titled “Treasure of Heroes” that is reproduced in a rare book titled Grimoire ou la Magie Naturelle. The book includes also the writings of Heinrich Khunrath who was an alchemist who greatly influenced the Rosicrucian movement. The text includes things like discussions of “the magical electrum armour of Achilles and how to reproduce it.”

In the section on Staricius “Treasure of Heroes” he discusses things like weapons and military equipment, fireworks and gunpowder, recipes for medicines and cooking. So my feeling that blood telegraphy originated in military matters is not that far off.

Regarding blood telegraphy, Staricius has a recipe for his “weapon salve” a method of forming a blood tie with another person and a means to communicate with them for up to 40 miles away.

Then when they have healed the second person should make the scrap on his arm and the first person should be the one to do the prick on a finger to drop onto person twos’ wound. This commingling of blood at a specific site allegedly sets up a means of communication.

Supposedly once this is done, a prearranged signal can be worked out, like Morse code where you can prick the scar on your arm and the other person whom you have formed a blood bond with will feel the prick up to 40 miles away. Someone named Burggravius wrote a text on life lights(another form of blood communication) called De Lampadis Vitae, around the year 1500.

A Denmark medical journal carried the article titled “Blood Donors and Telepathy.” A blood donor named Georg Lee from Copenhagen was proven to be able to feel sharp pricking pains in his arm from where the donor blood had been taken, at the moment the person he donated to had died. This happened on 7 separate occasions according to this article. Literature of the Middle Ages has a lot on Blood Telegraphy if you know where to look.

When I read the above information in some Rosicrucian literature, I was immediately struck with my modern thoughts that this sounds like some form of quantum entanglement.

Quantum entanglement is a theory in physics regarding distant communication between atoms not in communication in any obvious way.

It is theorized that the atoms of molecules can co-mingle once they come in contact with one another at the sub-atomic level. Simplistically this means once you touch someone or something especially if you exchange fluids as in a blood transfusion, you are forever linked to that person. Co-mingling of electrons may also explain psychometry a bit.

Without knowing about the blood telegraphy, experiments among occultists, alchemists and mystics of the middle ages, the modern day scientist Cleve Baxter did experiments that supported what the ancient occultists claimed. Much of the work of Cleve Baxter is documented in the book “The Secret Life of Plants.”

Cleve Baxter feels that atoms themselves have a form of consciousness. Many related experiments seem to prove this out such as those of Rupert Sheldrake on dogs knowing when their owners will be returning home after an absence, not related to a routine time of day.

This sort of thing has many implications for hard science as well as psychic science. That blood exchange can set up a way that two people can feel what is happening to one another means it goes without saying that organ recipients will feel become aware of things associated with their donors and this is the case.

Many organ recipients report feeling cravings for foods their organ donors loved and desired to take up activities the donor enjoyed. Children who get organs, have even claimed to be able to communicate with the person now dead, from whom they received the organ.

Even to being able to recognize a dead child’s parents as if they were their own, even though they had never seen their donor’s parents before.

It also goes without saying that this phenomena is likely the explanation of strong psychic ties between close family members. They not only share the same blood but the same DNA. Mothers instincts may be in part based on this if not in whole.

Paranormal literature is littered with accounts of parents who felt it when something like an accident occurred to a child, or a child felt that something was amiss with a parent, and ditto on things that are transmitted between siblings and even close cousins.

Husbands and wives who also regularly exchange biological matter, including white cells in kissing, are also known to know at a distance when something has happened to the other, if it is of a great emotional nature. Strong emotions seem to be the triggering force in this form of transmission of information in biological systems.

There are also implications here for fields like radionics, and distant healing, remote viewing and so on. It would seem that blood telegraphy was among the first recognized means of what seemed to be paranormal communication, but is it paranormal or ultra-normal as in quantum entanglement? Certainly more research should be done in this area of science and parascience.