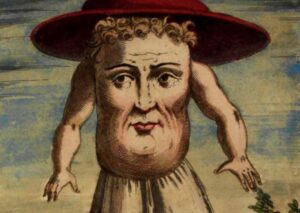 Blemmyae or Blemmyes also known as Ewaipanoma were an African tribe of headless men native to Libya and Ethiopia. They were also described in ancient Roman histories who threatened Roman Egypt a few times in the third century AD.

Their faces were on their chests, their name translates to chest-eyes. The early indirect reference to the Blemmyes occurs in Herodotus, “Histories”, where he calls them the akephaloi (Greek: ἀκέφαλοι “without a head”).

In antiquity, the actual tribe known as the Blemmyes were said to be named eponymously after King Blemys (Βλέμυς). In various medieval sources, blemmyes are said to be six, eight, or even twelve feet tall and perhaps half as wide. Furthermore, they are often reported to be cannibals.

Mela (a Roman Geographer, AD 43) was the first to name the “Blemmyae” of Africa as being headless with their face buried in their chest. Pliny the Elder in the Natural History reports the Blemmyae tribe of North Africa as “no heads, their mouths and eyes being seated in their breasts”. Pliny situates the Blemmyae somewhere in Aethiopia (in, or in the neighboring lands to Nubia).

In the “Roman d’Alexandre en prose”, the golden-colored headless tribe encountered by Alexander measured just 6 feet tall, and had beards reaching their knees.

In the French version, Alexander captures 30 of the headless to show the rest of the world, an element lacking in the Latin original. Other Alexander books that contain the headless people episode are Thomas de Kent’s romance and Jean Wauquelin’s chronicle.

In AD 1211, an explorer named Fermes claimed he’d found a tribe of “men without heads, who have their eyes and mouth on their chests” living on an island in Ethiopia, adding that they were 366 centimeters (12′) tall. And 100 years later, Sir John Mandeville claimed to have seen them, too.

By the Late Middle Ages, world maps began to appear that located the headless people further east, in Asia, such as the Andrea Bianco map (1436) that depicted people who “all do not have heads (omines qui non abent capites)” in India, on the same peninsula as the terrestrial paradise.

But other maps of the period such as the Andreas Walsperger’s map (ca. 1448) did continue to locate the headless in Ethiopia. The post-medieval map of Guillaume Le Testu illustrates the headless and the dog-headed cynocephali north beyond the Himalayan mountains.

Ottoman admiral and cartographer Piri Reis depicted a blemmye in South America (near the coast of Brazil, to be specific) on his world map, which published in 1513. Beside the drawing, he explains, “These wild beasts attain a length of seven spans [5′ 3″].

Between their eyes there is a distance of only one span [9″]. Yet it is said, they are harmless souls.” Thus, these blemmyes are a fair bit smaller than their Old World cousins—and apparently less hostile to humans.

Sir Walter Raleigh himself insisted the blemmyes tribe were real. In 1595, he reported that:

“Along the Caora river, there lived a nation of people whose heads appear not above their shoulders which, though it may be thought a mere fable, yet for mine own part I am resolved it is true because every child in the provinces of Arromaia and Canuri affirm the same. They are called Ewaipanoma.

“They are reported to have their eyes in their shoulders and their mouths in the middle of their breasts, and that a long train of hair groweth backward between their shoulders.” (Discovery of Guiana, spelling and punctuation updated)

Raleigh reported that these blemmyes lived in the same general area as the fabled city of Manoa, which the Spanish called El Dorado.

Ewaipanomas were depicted on numerous later maps using Raleigh’s account as a reference. Jodocus Hondius included them in his 1598 chart of Guyana and in a display various Amerindian peoples in a map of North America released in the same year.

Cornelis Claesz, who had worked alongside Hondius on numerous occasions, reproduced this display in a 1602 map of the Americas, but modified the Ewaipanoma to possess a true head but lack a neck, setting the figure’s head at the level of the shoulders.

Ewaipanomas began to decrease in popularity as a cartographic motif after this point; Hondius’ 1608 world map does not include them, but merely notes that headless men are reported in Guyana while casting doubt on the veracity of these claims. Pieter van den Keere’s 1619 world map, which includes a Claesz-like neckless figure in a display of Amerindian tribesmen, is the last to depict Ewaipanomas.