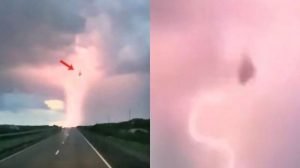 Bizarre footage has emerged of a UFO caught in the middle of a major lightning storm.

During a thunderstorm in Itacuakesetube, São Paulo State, Brazil, a black UFO triangle struck by lightning becomes visible in the center of the lightning and then disappears again.

At the same time, a second black object can be seen above the lightning bolt.

Triangular and pyramid UFO sightings have become quite common in recent years, particularly above north and central America, but not everyone thinks they’re aliens visiting Earth.

Often referred to as ‘Black Triangles’, some UFO experts claim people are actually seeing a top secret US spy aircraft known as TR-3B.

The theory goes that TR-3Bs are the product of reverse engineering extra-terrestrial technology.

TR-3 planes do not officially exist, but according to conspiracy theorists, they are a class of US surveillance aircraft first used during the Gulf War in the early 1990s and developed in complete secret.

There was a leak from the laboratory: new data on COVID-19