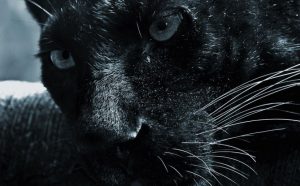 Although two species of big cats are known to have sizable populations of black phase individuals, only one of these lives in the Americas, and not in the Northeast.

Reports of large black cats, too large to be house cats, that seem to resemble black panthers have been reportedly seen in the Appalachian Mountains in the Northeast United States.

These creatures have garnered the attention of cryptozoologists, as biologists refuse to recognize the cats as real in such parts of the country. Yet sightings of big black cats in Appalachia are still reported every so often. That is why some have come to see black panthers as cryptids, according to newanimal.com.

When people think of popular cryptids, eerie creatures like the Chupacabra and Bigfoot may come to mind, but this animal which is certainly real elsewhere, fits the category because it is not thought to inhabit the Northeastern U.S.

What are Black Panthers?

Actual black panthers may be leopards or jaguars; both felines go through a stage where their fur turns black. Leopards are native to Africa and Asia, and jaguars are found in Central and South America, and perhaps at times in the very southern parts of the United States. The black phase in these cats is simply a color variant in its fur.

There are two species of big cats in the Western Hemisphere, which are the jaguar and the mountain lion. Although mountain lions (pumas, cougars, catamounts) have historically inhabited just about all areas of the continental United States (as well as much of Canada, and almost all of Central and South America), there has never been a single recorded black phase in a cougar.

And although jaguars represent one of the two big cats worldwide that come in black, the very northern limit of their range is the extreme Southwest (in the United States). Furthermore, black jaguars are much more common in the southern parts of their range, in the Amazon Rainforest.

Appalachian black panthers are revered by cryptics because biologists refuse to recognize the possibility of their existence. From Tennessee and West Virginia to the north, reports of black panther sightings are somewhat frequent.

Although such possible prey as deer and rodents, as well as fish are available in Appalachia, the region is very far out of the jaguar’s natural range and in the winter, much, much colder than anywhere jaguars are known to live.

And if the Appalachian cat is natural, it would almost have to be a jaguar, as scientists do not consider a black phase of the mountain lion remotely probable.

Possible Explanations for Black Panthers as Cryptids in Appalachia

Although relying on explanations is not nearly as intriguing as taking the cryptozoological approach, there are a number of factors that can attempt to account for big, black cat sightings in the Northeast.

First off, some sightings have been officially deemed hoaxes. Others have been cases of mistaken identity, where black house cats looked larger at great distance.

The third, probably most likely explanation of a credible report would be a sighting of an escaped jaguar or leopard from a zoo (and escapes have happened historically).

However, an actual black cat could also be the offspring of zoo escapees, which maintains that the animals are actually surviving in the area on their own.

Many people like to believe that such strange and noble creatures can exist so far out of place, but, as with most cryptids, scientists deem their existence unlikely. However, there are a number of theories that account for sightings of cryptid black panthers in Appalachia.