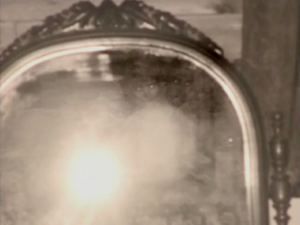 The dream of Steve and Beth Lee and their own 2 sons was to live in the gorgeous Black Forest region of Colorado.

For four years they rented homes in the densely forested area northeast of Colorado Springs before finding a spacious, two-story log home in the thickest part of the woods.

What they did not know was that the former tenant of the house was convinced the property was haunted but did not say anything. The unsuspecting Lees bought the property in 1992. Within a week, the gates of hell opened up on them.

“One day we came home,” said Beth, “and it was like the Fourth of July in our living room and in our bedroom. We had all kinds of lights flashing through, and it sounded like people stomping across the roof. We would lay in bed at night and hear chains rattling. One night we woke up and heard orchestra music. Strange things started happening every day.”

Their sons complained of weird lights and shadows in their rooms, lights and appliances started going on and off by themselves, and untraceable chemical odors burned family members’ eyes and throats. Steve Lee, a 34-year-old professional truck driver, believed someone was trying to scare his family out of their new home. But the Louisiana-born man told me that he had “just enough redneck left” to fight back no matter what it was.

He installed a state-of-the-art, $70,000 security system with video surveillance and motion detectors, though the system often sounded alarms with no one around to trigger them. Over the next four years, they would have sixty-two unexplainable “break-ins”, and the El Paso County Sheriff’s Department simply stopped responding.

Steve noticed that photographs and videotape taken in certain locations on the property exhibited strange light streaks running through them, and sometimes, translucent faces even appeared on the film. Three parts of the house seemed especially prone to these unusual effects: the outside wall next to their satellite dish, the living room, and the upstairs master bedroom.

No matter what type of camera or film he used, Steve captured evidence of unexplainable light phenomena that included brilliant beams, floating balls of light, and glowing outlines of humans and animals. Sometimes the mysterious lights could be seen with the naked eye, though most often, they lasted just a split second and showed up only on film.

Steve and Beth finally agreed that something paranormal might be going on in their home, and in early 1995, they sent some videotape to the “Sightings” television show. The show investigated the Lee property on three separate occasions, and producers considered it one of their most interesting and well-documented cases. In November 1996, the Lees invited me to investigate their property.

Three months earlier, the Lees had asked State Senator Charles Duke to investigate with his own camera equipment. He was able to capture a cloudy image that he said was “clearly a dog”, an apparition that had been photographed repeatedly on the property and that Steve believes might be his own dog who died ten years ago. I was also able to capture this “flying dog” on film, as well as the frightening face of another ghost, possibly the “old woman” described by some witnesses. Like most researchers who visit the Lee property, I experienced the unexplainable equipment problems and odd physical sensations. I also measured intense electromagnetic activity on the property.

So far, the Lees have called in over thirty different specialists, including paranormal researchers, private investigators, psychics, and quantum physicists. Several of the scientists have stated that the lightforms recorded on film do not behave according to accepted laws of physics. I am continuing my own investigation of the site and have concluded that it qualifies as one of the most “haunted” houses in the nation. And there is nothing that Steve Lee or his wife are doing to cause it.