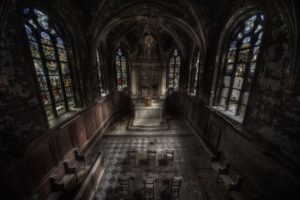 Now this story happened long before there were cars, or highways, or motels. Back in the old days, folks would travel or haul things by wagon, riding miles down long dirt roads to get from one place to another.

And the wagoners – that’s what the old folks used to call guys who hauled things – would get mighty tired after being on the road so long, and were always looking for a place to sleep.

That’s the dilemma Joe Bates found himself in. For two days, he’d been steering a wagon full of farm equipment destined for Red Springs, Alabama. Night was falling fast – as were his drooping eyelids. The last thing he wanted was to fall asleep and steer his team of horses into a ditch. So he figured he better find a place to catch a wink or two, even if it was on the cold, hard ground.

As luck would have it, Joe passed an old farmer walking home from a long day in the fields. Joe stopped him and asked where he might find some lodging. “There ain’t nothin’ between here and Red Springs,” the farmer said.

He then pointed toward a small dirt path that split away from the main road into a dense pine forest. “That there’s a short cut that’ll git you there in half the time. But I wouldn’t travel on that road at night.”

The old farmer spit a stream of tobacco juice into the bushes and said, “‘Cause ever’body knows that road is haunted.”

Well, Joe had been traveling through Alabama long enough to know that country folk made up a lot of tall tales to pass the time. So Joe grinned, patted the old man on the back and said, “Thanks, old timer, but I’ll take my chances, ghosts or no ghosts.” And with that, he steered his wagon into the forest.

A couple of hours went by, and Joe was starting to think that this so-called “short cut” wasn’t so short after all. All he could see around him in the darkness was thick, impenetrable forest. His lantern cast eerie shadows on the stark pine trees. Strange night creatures chattered amongst themselves in the shadows, as if waiting for the forest to swallow Joe alive.

Finally, the trees broke on one side to reveal a small, white clapboard church sitting on a small rise. The windows were dark, but Joe knew the door was probably unlocked. After all, preachers encouraged their flock to pray whenever they could, even at odd hours of the night. So Joe tied his team to the front post, walked up the stairs, and opened the heavy door with a loud creak.

Sure enough, the church was empty, So Joe stretched himself out in a pew in the back and chuckled to himself. He couldn’t believe his luck, finding this place so far out in the woods. It was almost enough to make him consider going to church again on Sundays! But he quickly shook that thought off and fell into a deep, much-needed slumber.

Moments later, Joe awoke to a sudden thumping sound coming from the front of the church. He lay quiet for a moment, thinking an animal had crawled inside. He heard it again, louder this time. Joe reached for his extinguished lantern, but couldn’t find a match to light it with. Cursing under his breath, he peered over the pew in front of him. His eyes took awhile to adjust to the darkness.

But when they did, he saw something that made him jump. Standing by the pulpit was a small figure in white, rocking back and forth on her heels slowly. “Who’s there?” Joe called out, only to be answered by a low, painful moan.

Joe found the matches in his pocket. He tried to light the lantern, but no luck. He looked up, and a chill ran through him as he saw the figure had moved closer. He could see it was a woman in a torn white dress, her long, stringy hair hanging over her face.

She was moaning louder now as she approached him. Joe found himself backing away toward the door. He tried to light the lantern again, but still the flame wouldn’t catch. He looked up and saw that the woman had moved even closer. He noticed that the front of her dress was stained with mud.

“Wh…what do you want?” Joe asked her, his voice cracking with fear.

He backed up against the door, but it was closed. The woman moved closer and closer, her moans growing louder and louder. Joe fumbled with the lantern again, striking another match.

This time the flame caught, and as he lifted the lantern in the air, he gasped – the woman was standing right in his face, her eyes crazed and bloodshot, skin pale and cracked like some long lost china doll! She reached for his face, and even in that split second, Joe could see that her fingernails were broken and dirty.

Joe flung the door open and ran to his wagon. He could hear the woman’s bare feet thumping down the church stairs behind him. He frantically untied the horses and leapt into the driver’s seat. And right before he sped away, he swore he felt the woman grab his shirt, trying desperately to pull him off the wagon.

Joe rode swiftly away from the church and did not stop until he reached Red Springs, just as the morning sun cracked the horizon. He found a local restaurant and collapsed into a chair. With trembling fingers, he lit a cigarette as the morning breakfast crowd stared at him strangely.

“You all right, Mister?” the Manager asked as he poured Joe a steaming cup of coffee.

Joe shook his head and told him the story of the ghost he’d seen in the church. The Manager stared at him for a moment, then sat quietly beside him and said, “That weren’t no ghost you saw. I think you saw Mary Ann Finch. And the Sheriff’s been looking for her for days.”

The Manager went on to explain that Mary Ann was a young woman who’d escaped from a nearby mental hospital. Seems she had delivered a baby girl out of wedlock a year or so ago. She was so scared that the townsfolk would shun her that she killed her baby, and buried it deep in the forest where no one would find her.

But her guilt only festered inside her, eventually making her crazy. So much so that her family put her in the hospital. But while she was in there, she cried out that she had had a change of heart, and wanted to dig up her baby, lying somewhere out there in those piney woods, cold and alone. Problem was, she couldn’t remember where she had buried her.

One night the doctors went to Mary Ann’s room to give her her nightly sedative, but she was gone. Most folks figured she had run off into the forest, but nobody was too eager about going in there and finding her.

After Joe told the Manager his story, the police went back to the old church, but all they found were a bunch of muddy footprints. But Joe didn’t stick around long enough to find out what ever happened to Mary Ann Finch. He delivered his equipment as promised and rode back home, swearing never again to take a questionable short cut, no matter how much time it saved.

And he also learned that he shouldn’t easily dismiss the tall tales that older folks might tell him. ‘Cause there may be a germ of truth in them after all, if you listen hard enough.