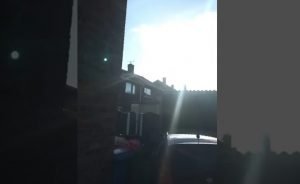 In the UK, a woman filmed something very strange: either a glitch in the matrix, or a UFO hidden by an invisibility cloak. To this day, many are trying to solve the anomaly, but to no avail.

The story happened on November 10 in Nottinghamshire. A woman named Jen Louise watched an anomaly for an hour, which is difficult to even describe: it needs only to be seen.

“Filming the sky, if I aim my camera in a certain position towards one part of the sky something weird happens”, wrote Jen.

No one was able to find an explanation for the incident. Some thought of nearby mobile radars that interfere, or military experiments. Other suggested that the interference was triggered by a hidden alien spacecraft.

Perhaps the woman saw some kind of glitch in the matrix. We can only guess and unfortunately, we are unlikely to ever know the truth.