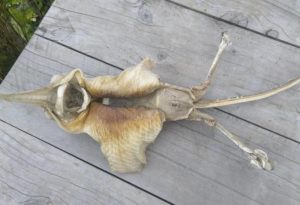 After a storm, this weird looking’ sea monster’ was found washed on a beach near Christchurch. It was found last Saturday by local resident Hanna Mary and her mother.

“I thought it was a sheet of plastic first,” she said.

“I pulled it out of the bottom of the sticks and it was a bit more than just a piece of plastic.”

“My first thought was that it was something alien, but I was more fascinated than anything.”

After a local taxidermist failed to identify it, Hanna decided to upload the discovery pictures to Facebook in the hope that somebody online could determine what they were.

The creature is most likely a male rough skate (Dipturus nasutus), according to Dr. Malcolm Francis of the National Institute of Water and Atmospheric Research (NIWA).

“They’re called rough skates because they’re very cumbersome… In Canterbury, it’s quite common, ” he said. “It’s like a flat shark, it has a cartilage skeleton. ”

“They spend a lot of their time on the bottom.”