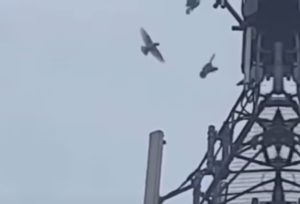 Recently, in different countries, people began to set fire to towers on which 5G equipment is installed. Arson became especially common after the coronavirus pandemic began, because some people are sure that the 5G towers and this disease have some definite connection.

But not only people attack the towers, but also birds. According to conspiracy theorists, pigeons may “sense” that the towers with 5G equipment do some specific harm and therefore try to eliminate it.

It is worth noting that these birds are quite smart. During numerous experiments, it was possible to establish that pigeons can distinguish two objects, for example, from three.

This suggests that they have some basic math. In addition, they have a very well-developed communication system.

For example, when two carrier pigeons fly in one direction, they somehow build a route that experts call ideal, if we consider it from the point of view of topography.

“It becomes clear why pigeons began to attack 5G towers. They are quite smart birds and feel the harm that these towers can do and are struggling to get rid of the danger”, wrote conspiracy theorist Patrick Nelson.

But not everyone agrees with these conclusions. According to network experts, 5G towers are similar to 4G towers and do not cause any harm.