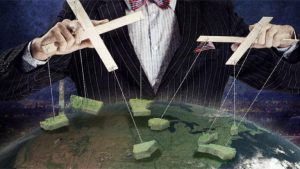 When pro-American Polish politician, Józef Retinger, and his friends founded the Bilderberg Group as a place for the Western world’s elite to meet in secret, he probably gave no thought to the conspiracy theories it would spawn because it was a different world in 1954 and conspiracy theories were few if any.

The main threat they saw at the time was world Communism. With anti-American sentiment on the rise in Europe, Retinger and his friends decided the best way to fight the Soviet bloc was to encourage the formation of an informal Western bloc.

To do that, the “great men” who pulled the levers of power in government and industry had to come together and work out where to steer the ship. They called the concept ‘Atlanticism’ — a shared understanding and cooperation between Western Europe and the United States on matters of politics, business, and the military.

With the backing of the Netherlands’ Prince Bernhard, then-CIA chief Walter Bedell Smith, and the White House, the first Bilderberg meeting took place in an obscure Dutch luxury hotel named Hotel De Bilderberg which is now forever associated with conspiracy.

The meeting was top-secret — no press covered the meeting, no information leaked — and so successful that attendees decided to do it again every year. Secrecy was preserved at the first and subsequent meetings through the Chatham House rule, prohibiting attendees from repeating direct quotes or telling who said what.

It wasn’t until conspiracy theorists — most notably the Russian-Canadian writer Daniel Estulin and the conservative American journalist Jim Tucker — blew the whistle on Bilderberg in the mid-1990s that the group’s existence became known to the public. (Though the group had been known to a handful of conspiracists as early as the 1960s, it was largely out of the public consciousness until then.)

According to Etulin and others, the attendees at modern Bilderberg meetings are no longer the shadowy power brokers of old. Instead, it’s become a fashionable thing for high-profile figures to pay the meetings a visit.

According to Estulin, the modern-day meetings aren’t where the decisions are made, but where they’re spread to the public-facing elite. Instead, Estulin believes the Bilderbergers are simply lackeys to a real power about whom we never hear.

It depends on who you ask, and what you mean. First, contrary to popular belief, there are no “Bilderberg Group members” per se. The only formal members are those of the Bildererg steering committee, which is in charge of organizing the meetings and choosing who will be invited. There is also a separate advisory group for the meetings.

With Bilderberg’s heavyweight connections in politics and industry, it should be no surprise that the meetings enjoy close cooperation with full support of the police and security forces of the countries in which they’re held.

Journalists who cover the meetings, particularly those who covered them in the early days, tend to report being followed and detained by security men of varying competence. Nowadays the ‘mainstreaming’ of the Bilderberg meetings means this is less common, though.

What Do They Talk About At Bilderberg Meetings?

Since the Bilderberg meetings share a founder with the European movement and the Council of Europe, which in turn led to the creation of the EU, observers generally agree Bilderberg played a key role in European integration. Supporting this observation is the warm welcome European commissioners and ministers have always been given at Bilderberg.

In fact, a reduction in national sovereignty seems to be a general theme throughout the years as Bilderberg’s industrialists seek easier ways to access each others’ markets and its politicians seek more influence over each others’ territory.

According to the late Jim Tucker, a veteran Bilderberg observer, the British Prime Minister was invited to a meeting in 1975 and asked to dismantle the United Kingdom’s sovereignty.

Similarly, Tucker’s comrade-in-journalistic arms Daniel Estulin managed to obtain a pre-meeting booklet for the 2009 conference, which cast the world into two possible futures: one of a long and agonized depression which results in long-term poverty, or one of an intense but short depression which produces “less sovereignty but more efficiency.”

Other topics of the meetings, according to the organization American Friends of Bilderberg, have included reducing nuclear stockpiles, Africa, Russia, US-EU relations, Afghanistan, Islam, and cyberterrorism.

So is there a Bilderburg Conspiracy? Is the Bilderburg Group an evil plan to bring about a one world government?

Comically, Étienne Davignon, former Chairman of the Bilderburg Steering Committee, had this to say about conspiracy theories, “It is unavoidable and it doesn’t matter. There will always be people who believe in conspiracies but things happen in a much more incoherent fashion… When people say this is a secret government of the world, I say that if we were a secret government of the world we should be bloody ashamed of ourselves.”

CIA MK-Ultra: When The Government Dose LSD Without Your Knowledge