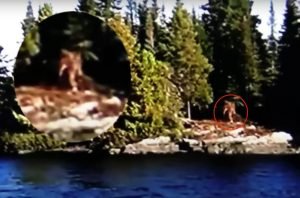 The video is said to have been filmed by people boating in northern Ontario. The specific location is not indicated and the identity of the authors of the video is also not named.

The footage shows fishermen filming the nearby wooded shoreline as a large, fur-covered, bipedal creature emerges from the forest and walks along the exposed shore for several seconds before disappearing back into the forest.

Notably, the alleged Bigfoot boasts coloration that allows him to largely blend in with his surroundings, and he swings his arms rhythmically and widely in much the same way as the famous Bigfoot from the Patterson-Gimlin film.

Unlike many purported Bigfoot videos, which are basically some sort of dark moving blob in a dark forest, the footage shows an undeniably bipedal figure that can be seen clearly for about six seconds, which is long enough to get a sense of the elusive cryptid.

More skeptical users might argue that the animal in the video could be a bipedal bear, although this explanation is somewhat stretched in light of how smoothly the creature moves.