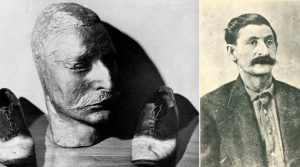 George Parrot is infamous not only for being hanged as an outlaw, but also for being the only man in American history who became a pair of shoes after his death.

Known for his big nose which gave him his nickname of “Big Nose George,” was a member in a gang of road agents and horse thieves who robbed wagons and stole horses in the Powder River country of Wyoming.

On August 16, 1878, the gang plotted to rob a Union Pacific train by causing it to derail. However, as seven of the outlaw members hid in the brush waiting for the train to arrive, a section crew came along, discovered the tampered rail and sent for the law.

The gang was soon tracked down by two lawmen whom they shot, killed and dismembered. Outraged, The Union Pacific Railroad doubled their efforts in tracking the murderers and county authorities offered a $10,000 reward for their capture.

Several members of the gang were caught and put to death. Dutch Charlie was the first to be apprehended in 1879, however, while being transported to his trial, an angry mob in Carbon dragged him off the train and hanged him from a telegraph pole.

Big Nose George was apprehended in Miles City, Montana in July 1880, after drunkenly boasting of the attempted train robbery. In no time, a telegraph was sent to Rawlins and Sheriff Rankin of Carbon County went to Montana to take George back to Wyoming. Again, as the train made its journey, it was stopped in Carbon by the same mob that had lynched Dutch Charlie. Big Nose was hauled off the train and was prepared for lynching.

However, when the outlaw began to plead for his life and confessed, promising to tell all he knew about the murders if they would let him live, the vigilantes cut him down. Big Nose was then allowed to continue the journey to Rawlins to stand trial.

On December 15, 1880, he was found guilty and was sentenced to hang on April 2, 1881. However, a failed escape attempt on March 22 was to speed up the process. When George attacked Jailer Robert Rankin, he fractured his skull and cut his scalp in the process. However, the day was saved when Mrs. Rankin appeared with a pistol in her hand and Big Nose George was forced back to his cell.

When the news of the attempted escape spread throughout the city, a masked mob soon formed and stormed the jail.

They dragged George from the jail to a telegraph pole in the street and as a crowd of about 200 people gathered, the vigilantes botched the first two hanging attempts, but on the third try, Big Nose George finally died at the end of a rope.

The body was left hanging for several hours until the undertaker removed it. According to a book called The Legend of Big Nose George, “The nose of the dead man was so large that it interfered with the lid of the coffin and excess pressure had to be exerted to close it and nail it down”.

Having no family to claim the corpse, Doctors Thomas Maghee and John Osborn took possession of it, in order to study the outlaw’s brain to determine if there might be a reason for his criminal behaviour. Also on hand was a 15 year-old Lillian Heath who was working as an assistant to Dr. Maghee.

After the skull cap was crudely sawed off, the doctors examined it and found no marked differences between Parrot’s brain and a “normal” one. Osborn began by making a death mask of George’s face with plaster of paris, although the mask lacks ears because George’s ears were torn off as he struggled at the end of the rope.

However, it was at this point that Osborn’s behaviour became rather bizarre. He removed the skin from George’s thighs and chest, which were sent to a tannery with instructions to use the skin, including the dead man’s nipples, to make him a pair of shoes and a medicine bag. When Dr. Osborn received the shoes, he was disappointed to find they didn’t include the nipples, but proudly wore them anyway. The doctor continued his experiments and dissection for a year, keeping George’s dismembered body in a whiskey barrel with a salt solution. When he was finished, the remains were buried in the yard behind Dr. Maghee’s office.

Despite the doctor’s behaviour in the desecration of George Parrot’s body, he soon became prominent in local politics. In 1892, the doctor was elected as the first Democratic Governor of the State of Wyoming and was said to have worn the shoes at his inaugural ball in 1893. Later Osborn would become the assistant Secretary of State under President Wilson.

The skull cap was given to Miss Heath, who later became the first female doctor in the state of Wyoming. Over the years she used it as an ashtray and a doorstop in her office.

The incident was all but forgotten until May 11, 1950, when construction workers excavating for a new building on Cedar Street, unearthed a whiskey barrel filled with bones. The location was behind the building that had served as Dr. Maghee’s office years before. Inside the barrel were numerous human bones including a skull with the top sawed off.

In no time, as a crowd gathered to look at the grisly remains, someone remembered that Dr. Lillian Heath had kept the skull cap. While well into her eighties, Heath was still alive and she was immediately contacted. When her husband brought the skull cap to the scene it fit perfectly with the skull found in the barrel. Though locals were convinced these were the remains of Big Nose George, subsequent DNA testing verified the results.

Big Nose George’s death mask, skull and infamous shoes made of his skin, are now the star attraction at the Carbon County Museum in Rawlins, Wyoming, along with the shoes he wore to his lynching. Also on display is a watch given by the County Commissioners to Rosa Rankin for having stopped Big Nose George from escaping from jail in 1881. The museum is one of the biggest attractions in the city.

The outlaw’s skull cap, and the shackles used on Big Nose during his hanging resides at the Union Pacific Museum in Council Bluffs, Iowa. The rest of Parrott’s remains were secretly buried in an unknown location. The medicine bag made of his tanned skin has never been found.

Angel Signs: How To Know You’ve Been Visited By An Angel

Grace Galloway: The Lady In The Glass Case