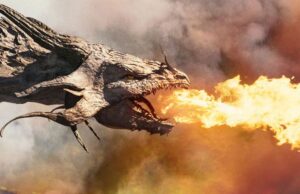 Dragons can be found in myths and stories of different peoples of the world, but at the same time everyone considers them to be just fiction. Tom Meyer, biblical expert, is confident that the Bible and some historical reports can prove that dragons used to live with people.

Tom Meyer is an American speaker, college professor, Bible memorization expert, and author. He is best known as The Bible Memory Man because of his unique ability to quote over 20 complete books of the Bible dramatically from memory, although he is often mischaracterized as having the entire Bible memorized.

The Bible expert told Express.co.uk the word dragon is an umbrella term describing creatures of all shapes and sizes, much like the word dinosaur describes a multitude of species.

In the Old Testament, the terrible beast is mentioned over 20 times. Tom Meyer is sure this cannot be a coincidence. In his opinion, this is one of the proofs that dragons once really existed.

He said: “A reexamination of the chronicles of ancient Roman historians and of the Bible can demonstrate that dragons were actually contemporaneous with mankind.

“In antiquity, various kinds of creatures were all organized under the category of ‘dragon,’ similar to how today we categorize different kinds of animals as ‘dinosaurs’.

“The most famous of the dragon accounts is that of the dragon slayer, St George, whose story took place in the late third century AD.

“Although the story of St. George and the Dragon has had some fictitious additions over the ages, its base story is quite possibly true.”

In addition, dragons or creatures resembling them were found in the chronicles of ancient Roman historians. Tom Meyer continues to study various historical texts and the Bible today to find even more evidence for the existence of dragons.

But many disagree with the expert. Some believe that dragons are a visual reflection of human fears. Others are sure that people confused the remains of dinosaurs with the bones of a dragon.

So far, the debate on this matter continues and it is not known whether anyone will be able to find really strong evidence that dragons lived on our planet.