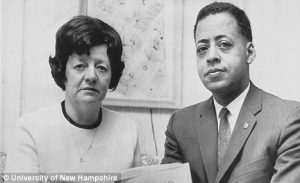 This amazing real Alien abduction story started on the evening of the September 19th through the morning of the 20th when Barney and Betty Hill were driving home down Route 3 coming home from vacation in Canada and northern New York.

While driving the long way back to their home in New Hampshire Betty Hill noticed a bright light in the sky that seemed to be following at a distance behind them.

Barney figured it was simply a bright star, satellite, or perhaps an aircraft heading to the Pease Air Force base in Portsmouth, NH.

After noticing the object doing strange maneuvers in the sky such as speeding up slowing down and going up and down they started getting a little curious about this Unidentified Flying Object and decided to stop, walk the dog and get a closer look at the object through their binoculars.

While getting out of the car Barney decided to grab his pistol out of the trunk in case of large animals that regularly live in the area. After walking the dog and convincing himself it was just a normal aircraft, he got back in their car and tried to convince his wife Betty that it was nothing special, but she was skeptical since her sister had just told her of a similar story where she saw a real UFO.

They continued to drive down the road while Betty kept a close eye on the object in the sky. She later reported watching it move up and down and get fairly close to their vehicle and then backing off when it was just getting into site. Then, suddenly the UFO sped up and descended directly in front of the car hovering around 20 feet in the air making them stop.

Barney directed Betty to stay in the car as he grabbed his pistol and binoculars and jumped out of the car to have closer look at this strange UFO. He ran over to the object and could see a group of human like alien beings through a large window in the front of the ship. Fear then rightly struck Barney and he ran back to the vehicle afraid for his and his wife’s life.

Rapidly driving off he asked his wife to keep an eye on the craft and to keep him updated on its position. Then, suddenly Barney and Betty Hill heard a beeping sound that they said sounded like a microwave and the car began to vibrate rapidly and stall.

After getting home, they both felt a little strange and couldn’t really remember the events that followed after the beeping sound. Barney noticed that the strap from the binoculars was torn and Betty’s dress had been ripped and was covered in some kind of a pinkish powder.

Thinking the worst had happened they called the Pease Air Force Base to report the incident, but was told they must have just seen the planet Jupiter since it was bright in the sky that evening and left it at that.

Day’s later the man from the Air Force Base contacted them back and for some reason did a detailed interview with them amazed by the fact that they had been abducted, seen an Alien Craft and contacted real aliens.

Betty had begun having horrible nightmares of probing and being forcibly handled. These dreams had started to affect her life so she decided to see a hypnotist with her husband to see what they could uncover. During the separate hypnosis’s Betty remembered talking to the Aliens about what was going on and them responding in a calm and scientific manner.

“We’re just going to do some basic tests” said the aliens. She then reported them testing her eyes, ears and nose much like a normal physical then they took some samples of her skin and nails and inspected her heart and used some large machine to do other internal tests according to what the aliens said.

Betty had also apparently made up nick names for the aliens as well calling the doctor the “examiner” and the person in charge the “leader”.

She had asked where they were from and they showed her a map of the star system and also asked if she could take home a souvenir which they said yes and then changed their mind and took back the book they were going to give her.

During Barney’s hypnosis he remembered being grabbed and the strap on the binoculars ripping while trying to get away. The examiners did the basic tests they had done on Betty, but were oddly amazed at the fact that his teeth were removable unlike Betty’s. On top of that they took some extra samples such as semen and let him go with his wife.

After the hypnosis, Betty and Barney Hill were asked to draw a picture of the Aliens and Betty who had seen the star map was asked to draw out the map of the star system which was unknown at the time, but has now been found by amazed astrologers around the world.

The two pictures of the aliens were very similar and the stories were exactly the same from the couple. The dress that Betty had been wearing with the strange pink powder had sat in her closet for some time until scientists around the world started asking for samples which she gladly cut off and sent out.

The couple is currently deceased, but their amazing story is still one of the most detailed accounts of alien abduction to this day and will be remembered always. They never changed their amazing story and even on their death beds recalled the events in amazement not knowing what to expect on the other side.