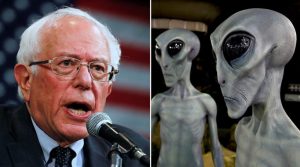 The presidential candidate Bernie Sanders promises to publish full information about aliens if he is elected in 2020, reports space.com.

A 77-year-old Sanders reveal podcast host Joe Rogan on Tuesday that he would release everything the government has about aliens and UFOs if he happens to become president of the United States next year.

“Well I tell you, my wife would demand I let you know,” Bernie said.

When Rogan asked Sanders if his wife was an ‘UFO nut’, he said she wasn’t, but she had earlier pressed him on what he knew as a senator on the topic.

This is not the first time a Democratic presidential candidate has pledged either to look into the subject of UFOs-back in 2016 Hillary Clinton also promised to do something very comparable.

She also mentioned that her campaign chairman, John Podesta, expressed a strong interest in UFOs and was a longtime fan of ‘The X-Files’ science fiction show.

“He has made me personally pledge we are going to get the information out,” Hilary said at the time. “One way or another. Maybe we could have, like, a task force to go to Area 51.”

However, given how her election campaign turned out, no one had the opportunity to take her on it.

What about Bernie? We’ll find out soon …