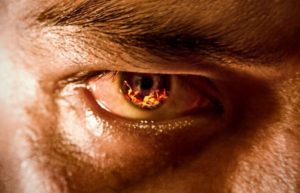 In 1982 Benedetto Supino, an Italian adolescent boy, discovered something quite strange about himself. He was sitting in a dentist’s waiting-room reading a comic book when all of a sudden the thing burst into flames right there in his hands.

At the time, no doubt, he claimed total innocence to deaf ears. Once a fiery pattern was established after a few more incidents, his surrounding adults may have been more likely to believe him – especially when they actually saw him accidentally ignite things without a match in sight.

As we already said, Benedetto Supino discovered his strange powers at a young age – around 10 – when a dentist’s comic book flamed-up in his hands. Although there were instances of the boy starting a flame with sufficient intention and concentration, it seems that usually neither was the case.

Paranormal.about.com gives an example of the latter happening:

“One morning [Supino] was awakened by a fire in his own bed – his pajamas were in flames and the boy suffered severe burns.”

Doesn’t sound like a terrific gift there, does it? The same article goes on to give other instances of flames starting by his intention, or merely by his presence:

“On another occasion, a small plastic object held in his uncle’s hands began to burn as Benedetto stared at it. Just about everywhere he went, furniture, paper, books and other items would start to smolder or burn. Some witnesses even claimed to see his hands glow at these moments.”

Everywhere he went – according to some sources, fuse boxes ignited, newspapers burst into flames and non-specific ‘small objects’ would smoke and burn. Obviously the boy’s parents worried.

They sent him to physicians and scientists who apparently found no reason for the strangeness. He was also sent to an Archbishop with the same result – nothing. The burden taxed the boy – he himself can be quoted as saying:

“I don’t want things to catch fire, but what can I do?”

It seems though, that with some help he was finally able to learn control. According to Prediction Magazine:

“When an entire army of doctors were unable to help him, he turned to parapsychologist Dr. Demetrio Croce, who taught him to control and hone his abilities.”

Benedetto Supino did not want to participate in any investigation of his ability. According to his parents, he only wanted a normal life.

Now we haven’t found any specifics as to what exactly is meant by the word ‘hone’ in this case. We don’t know whether Supin’s just managed to turn it off completely, or just to burn things he wants to burn.