It’s quite remarkable how many verified statements we have regarding UFOs (unidentified flying objects) and extraterrestrials from people who have held the highest positions possible within the government, military, academia, politics and more.

To be honest, it’s overwhelming, and when you put all of those statements together with all of the previously classified documentation that has been released over the past few years, it paints a startling picture.

Anybody who has done even a fair amount of research, and adheres to the philosophy of “condemnation without investigation is the height of ignorance,” would not be able to deny this, and we have yet to come across someone who has done the research that still subjects this topic to the “conspiracy theory” realm.

What did Ben Rich know?

Rich was the second director of Lockheed Skunkwork’s from 1975-1991. He’s been called the Father of Stealth, having overseen the development of the stealth fighter, the F-117A nighthawk. Before his death, Rich made several shocking open statements about the reality of UFOs and extraterrestrials.

“We already have the means to travel among the stars, but these technologies are locked up in black projects, and it would take an act of God to ever get them out to benefit humanity. Anything you can imagine, we already know how to do it.”

“We now have technology to take ET home. No it won’t take someone’s lifetime to do it. There is an error in the equations. We know what it is. We now have the capability to travel to the stars.”

“There are two types of UFOs — the ones we build and the ones ‘they’ build.”

When Rich was asked how UFO propulsion worked, he said, “Let me ask you. How does ESP work?” The questioner responded with, “All points in time and space are connected?” Rich then said, “That’s how it works!” 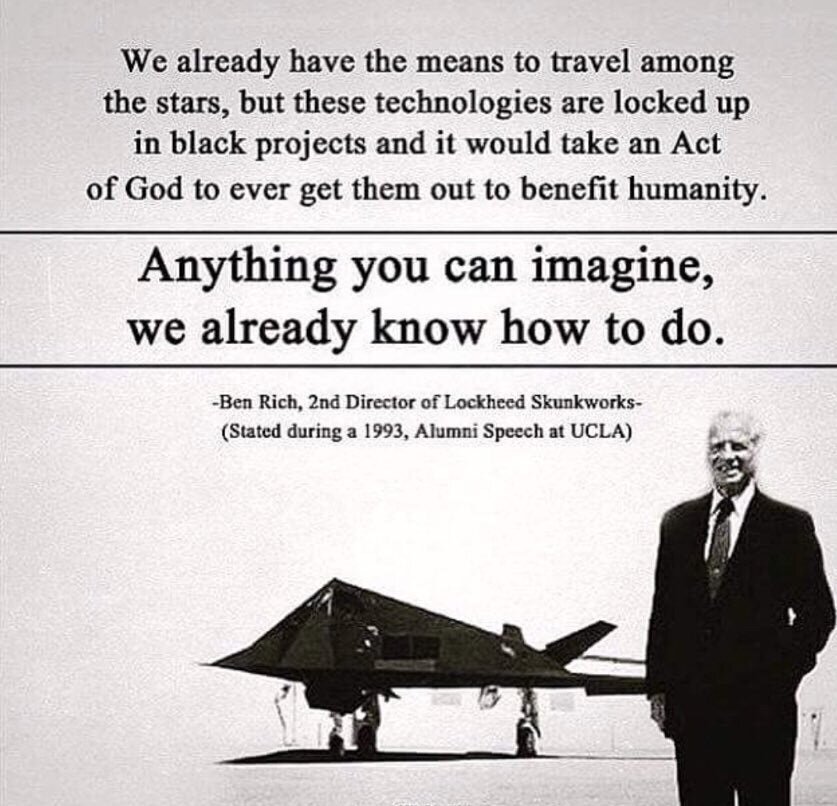 James Goodall knew Ben Rich well. In a video interview, Goodall stated that he spoke to Rich approximately 10 days before he died:

“About ten days before he died, I was speaking to Ben on the telephone at the USC Medical Center in LA. And he said, ‘Jim, we have things out in the desert that are fifty years beyond what you can comprehend.

“They have about forty five hundred people at the Lockheed Skunk works. What have they been doing for the last eighteen or twenty years? They’re building something.’”

“Yes, I’m a believer in both categories. I feel everything is possible. Many of our man-made UFOs are Un-Funded Opportunities. There are two types of UFOs, the ones we build, and the ones they build.”

A senior executive with IBM, along with Tom Keller, an aerospace engineer who has worked as a computer systems analyst for NASA’s Jet Propulsion Laboratory, discusses a talk Ben gave some time ago.

On March 23rd, 1993 at a UCLA School of Engineering talk where he was presenting a general history of Sunk Works, he said this:

“It is time to end all the secrecy on this, as it no longer poses a national security threat, and make the technology available for use in the private sector.

“There are many in the intelligence community who would like to see this stay in the black and not see the light of day. We now have the technology to take ET home.”

A forensic illustrator for the aerospace industry, and a good friend of John Andrews (mentioned above). He stated that:

“It was Ben Rich’s opinion that the public should not be told. He believed they could not handle the truth, ever.

“Only in the last months of his decline did he begin to feel that the international corporate Board of Directors’ dealing with the ‘Subject’ could represent a bigger problem to citizens’ personal freedoms under the United States Constitution than the presence of off world visitors themselves.”

And that is not all

Recently, former Nevada Senator Harry Reid, once a major leader in the Democratic party before his retirement, has claimed that defense contractor Lockheed Martin may have had fragments of a crashed UFO in its possession.

“I was told for decades that Lockheed had some of these retrieved materials,” the Democrat told The New Yorker.

“And I tried to get, as I recall, a classified approval by the Pentagon to have me go look at the stuff. They would not approve that. I don’t know what all the numbers were, what kind of classification it was, but they would not give that to me.”