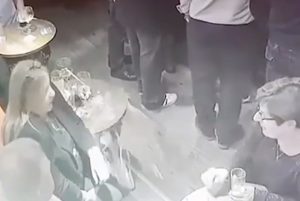 CCTV footage of The Salmon pub in Belford, England shows a spontaneously smashed glass. The footage, which has been viewed more than 40,000 times so far, has been shared online by landlords Michael and Donna Duns, who have run the pub for the last 3 years.

“The glass was there for about 20 minutes, and half a pint was still in it,” Michael said.

“I heard that the pub was haunted by a couple of people before whom I believe it happened after this.”

“The three tables in the video were known to be where the main incidents occur when glasses move and fall off tables. We’ve seen two moving glass incidents, but never something like that.”

The footage seems to show a spontaneous break of a glass, but what caused it to happen is unclear. Some users of social media have argued that this kind of thing can actually happen quite often.

“Glasses smash like that in pubs all the time when all the washing, hot steam and sanitary chemicals are used, the best is when the bottom of the glass falls out, ” Rachel Clamp wrote.

In the meantime, others are convinced that something paranormal must have been responsible. The footage can be seen below.

Evidence of paranormal? Something dragged the dog out the door