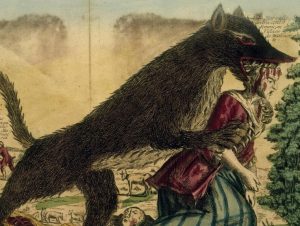 In June 1764, in the Gevaudan region of southeastern France, a young woman was tending cows and saw a horrid beast lumbering towards her. It was the size of a donkey, but it resembled a wolf. Her dogs ran away in terror, but the cattle chased the beast away with their horns.

This was the first sighting of what became known as the Beast of Gevaudanan. The woman was fortunate. Others were not so lucky. Men, women and children were killed, their bodies, savaged and mangled by the beast.

The first victim, in July, 1764, was a young girl whose heart was ripped out. The slaughter resumed later that summer. Soon, the beast was attacking groups of men. It showed no fear. The people believed it was loup-garou, werewolf.

On October 8th, two hunters shot it with several rifle balls. The distance was ten paces. The beast limped off and the peasants thought it went off in the woods to die. Within a matter of days, the brutal killings resumed.

The Paris Gazette printed witnesses’ description of the beast. It was taller than a wolf and the paws had talons. The hair was reddish. The muzzle was shaped like a greyhound’s. The ears were long and straight. The breast was wide and grey and the back was streaked with black fur. The mouth was big and filled with sharp teeth.

The English St. James Chronicle, on June 6th, 1765 wrote that it seemed that the thing was not a wolf, hyena or tiger, but a mongrel of the hyena and tiger. But, hyenas and tigers are not native to France. Nor can they produce offspring.

There was a horrible attack on two children, despite the older youths stabbing at it with knives and pitchforks that prompted the villagers to appeal to the Royal Court at Versailles. King Louis XV sent a troop of light cavalry led by Captain Duhamel to kill the beast.

Because the beast favored females, some dressed as women. They shot the beast, but it always managed to escape. Finally, the killings stopped. Duhamel believed the beast was dead and returned to Versailles. After they left, the slaughter continued. 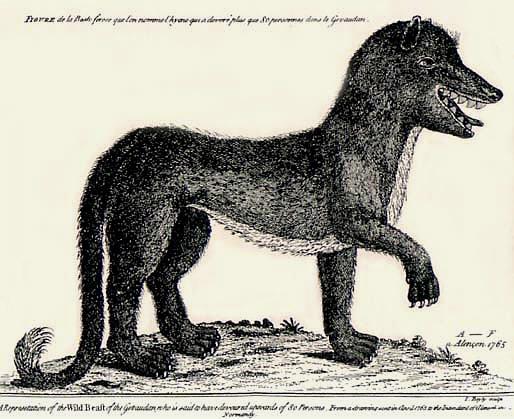 Finally, there was a large reward to whomever would kill the creature. Professional hunters and soldiers went to Gevaudan. A professional wolf hunter was also sent by the King. He and other hunters said they had wounded the beast badly, but the killings did not stop. Unfortunately, over 100 wolves were killed.

During the summer of 1765, the beast attacked many children. As time passed, entire villages were abandoned. People reported they saw the beast look at them through the windows of their homes. Many of the peasants were afraid to venture out. Some of the peasants were too scared to shoot at it even when they had a clear shot.

In June of 1767, the Marquis d’Apcher, who lived in the western part of Gevaudan, gathered a group of several hundred trackers and hunters. The beast’s massacres had to be stopped. They fanned out in small bands over the area.

On the evening of June 19th, the beast charged at the men in one of the bands.

One of hunters, Jean Chastel, believed the beast was a loup-garou and had loaded his rifle with silver bullets. He shot at it twice and the second shot pierced the beast’s heart, killing it. The animal was gutted and they found a collar bone of a young girl in its stomach.

The beast killed about 60 people. The state spent over 29,000 livres, a fortune at the time, to track it down and kill it.

The body was carried throughout Gevaudan for two weeks before it was going to be sent to Versailles. The carcass started to putrefy and it was buried somewhere in the countryside.

There are two other versions as to what happened to the body. One has it being burned after the beast was killed. The article, itself, gives so much other detail that it reads more like fiction. The other has the body being transported to Versailles and stuffed and mounted, but, mysteriously disappearing, another thing fiction is made of.

Many experts on wolves, if this is what the beast was, believe that wolf attacks are extremely rare. This has been evidenced by documentation. Whatever the Beast of Gevaudan was belonged to the realm of cryptozoology, because of its size and the fact that it killed so many people so violently and savagely.

It is odd that the dogs fled in terror when they saw the beast. Dogs have been used in hunting wolves and they have been known to mate with them. The beast was shot many times before it was killed by a silver bullet.

Mutant wolf? Werewolf? There are documented court cases of people who confessed that they were werewolves. When caught, they were in human form. The beast remained a beast and was killed in wolf form.