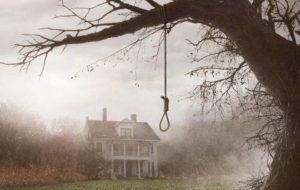 One of the most intense paranormal events in the history of the United States took place at an old farmhouse in Harrisville, Rhode Island, beginning in 1970 and lasting for ten years. The ghostly infestation of the property commonly called the Old Arnold Estate, built in 1736, remains one of the best-documented cases of a haunting, possible supernatural events and possession yet recorded.

The story began when Rodger and Carolyn Perron decided to buy the Old Arnold Estate with the hope that it would be a great place for their five daughters, Cindy, Nancy, April, Christine and Andrea to grow up.

Perhaps they should have known that there may be something of concern about the old farmhouse when they were told by a previous renter “Leave the lights on at night.” It appears that the paranormal activity began to be experienced by the Perron family immediately after they moved into the home on Round Top Road. Before long the family found themselves surrounded by an array of spirits from various periods of the home’s long history.

Among the phantom figures at the Perron house was that of Mrs. John Arnold who at age 93, hung herself in the barn. Then there was the tragic story of eleven-year-old Prudence Arnold. Prudence was raped and murdered on the property and the crime was never solved although the murderer was believed to be one of the Arnold farm hands. There are also believed to be the ghosts of two drowning victims who lost their lives at a nearby creek and the spirits of four men found frozen to death on the farm. Other ghosts were believed to be those of forgotten Arnold family members who lived and died on the farm for eight generations.

Despite the strangeness of the situation, the Perron girls seemed to enjoy the spirits that roamed the old farmhouse. Most of the apparitions seemed to be harmless and even amusing. One of the commonly seen ghosts was believed to be that of Johnny Arnold, the Perron girls called him “Manny.” Johnny Arnold hanged himself in the attic of the home in the 1700’s but as a ghost seemed to be at peace. Manny appeared in a semi-transparent form and enjoyed watching the girls at play but would disappear if eye contact was made.

There was also the sweeping ghost. This spirit was never seen but the apparently female spirit made herself well-known to the family. On many occasions while in the living room or other rooms nearby, the Perron’s would hear the sound of someone sweeping in the kitchen. When they entered the kitchen they would find the broom had been moved from the spot it had been and the floor had been freshly swept, a neat pile of dust left on the floor ready to be disposed of.

Unfortunately, as the Perron’s spent more time in the old farmhouse it began to become obvious that not all spirits in the home were harmless. There was something violent and evil in the home and it seemed to focus mostly on Carolyn Perron. The spirit responsible for the violence directed at Mrs. Perron, which included some significant physical wounds, was believed to be that of Bathsheba Sherman. Bathsheba was described by someone who knew her as a vile and disgusting woman who enjoyed beating workers at the Arnold Farm.

It was believed that Bathsheba was a witch or Satanist and responsible for the deaths of young children left in her care. In fact, Bathsheba was charged with the murder of a child, the charges, however, were later dropped by prosecutors. Bathsheba Sherman eventually hanged herself on the property, reportedly as part of a pact with the Devil. As bad as the ghost of Bathsheba may have been, perhaps the darkest and most evil entity at the Perron house has never really been talked about. It has only been mentioned vaguely by one of the Perron girls, Andrea Perron, “Let’s just say there was a very bad male spirit in the home – with five little girls.”

After living in the haunted House on Round Top Road for ten years the Perron family moved out. The paranormal activity, however, continued on according to Norma Sutcliffe who followed the Perron’s as residents of the Old Arnold Farm and persists to this day. Sutcliffe reported that blue orbs, banging doors and what she described as a ghost fog are present in the home. The story of the Perron family haunting was the basis of the film “The Conjuring”.