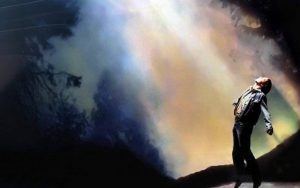 In 1993 the movie Fire in the Sky was released and claims to tell the true story of an alien abduction. The fact is that the movie is based on Travis Walton’s book The Walton Experience which is a first had account of a claimed abduction.

Travis Walton claims that on November 5, 1975 that he was abducted by a UFO. His claims were backed up by several eyewitnesses and caused a storm of controversy. This controversy is still unsolved to this day. I will provide for you the facts and evidence of this amazing case and allow readers to draw their own conclusions.

Travis Walton was a 19-year-old young man at the time of the incident. His best friend Mike Rogers, who operated a logging company, had hired him to help thin out scrub brush and other undergrowth from a large area near Turkey Springs, Arizona. This was the largest contract that Roger’s had ever received and they were running behind schedule.

So as to not disappoint their contractor he and his crew, Walton included, would work from dawn till dusk. On November 5, 1975 at around 6 PM the crew finished up their work for the day and all piled in Roger’s truck to head home. After driving for a short time the group saw a bright light coming from behind an oncoming hill. The group drove closer to the light and discovered its source was a saucer shaped object hovering in the sky.

Roger stopped the truck and Walton leaped from the vehicle and ran toward the object to get a closer look. The group yelled at Walton to get back in the truck but they were ignored. The men in the truck claim that Walton was nearly below the object when it began to emit a loud rumbling sound.

A beam of blue light then shot from the spacecraft and engulfed Walton. Walton was lifted from the ground and hovered in the air for a moment before being thrown over ten feet. Walton crashed to the ground with a sickening thud. Rogers and the other men in the truck began to panic and fled the scene.

The men drove for a short time fearing that the strange craft would follow them. They finally calmed down and stopped the vehicle. The group of loggers in the truck then began discussing what should be done about the situation.

They ultimately decided to go back and look for Walton. When they returned to the site both the UFO and Walton were missing. The men searched a half-hour before phoning the police. Deputy Sheriff Chuck Ellison responded to the call. The men told him what happened to Walton. The men were all distraught and some of them were crying.

Ellison phoned his superior Sheriff Marlin Gillespie, who arrived at the scene and then heard the same story. Gillespie demanded that the group of them return to the scene and begin searching for Walton. By November 6, helicopters, volunteers, and police officers were searching the area looking for Travis Walton.

On Monday, November 10, all of Rogers’ crew took polygraph examinations. The crew were asked about the UFO and if they had harmed Walton or knew who did. The entire crew passed the polygraph test with the exception of one who refused to take the test.

He would later admit that he refused the test because he was attempting to conceal a past criminal record. This led to Sheriff Gillespie to proclaim that the UFO story was in fact true. 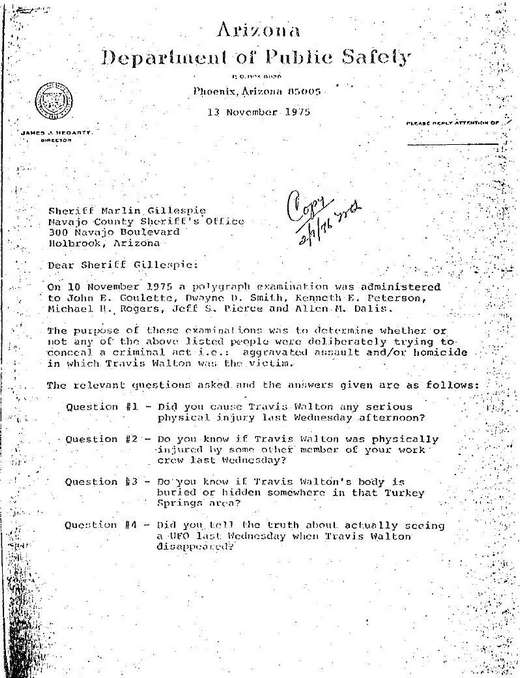 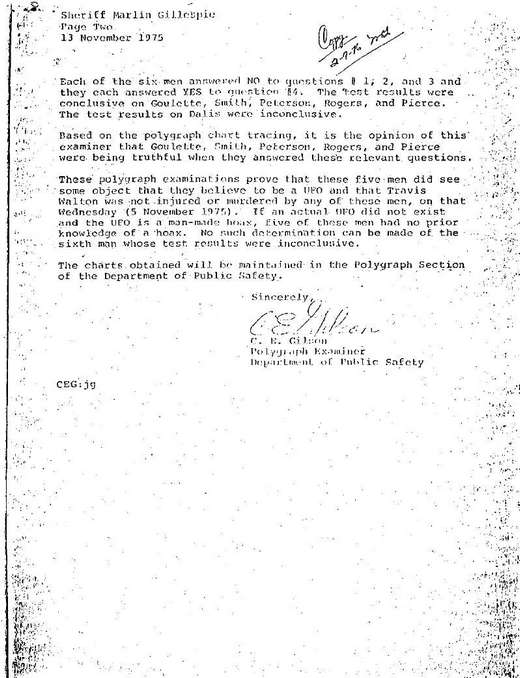 Later on that same day at around midnight, Walton’s brother-in-law, Grant Neff, received a telephone call. The person on the other end said, “This is Travis. I’m at a phone booth at the Heber gas station, and I need help.

Come and get me.” Neff had been receiving prank phone calls since Travis’ disappearance and assumed this to be another one until the person on the other end of the phone shouted with extreme anguish, “It’s me, Grant … I’m hurt, and I need help badly. You come and get me!” Neff headed to the gas station with Travis’ brother and the pair found Travis collapsed on the floor of a phone booth wearing the same clothes he had on the day he disappeared.

On the drive back to Travis’ home in Snowflake, Arizona, Travis seemed confused and terrified. He kept mumbling about beings with “terrifying eyes”. Travis was under the impression that he was only gone a couple hours and when he learned it had actually been gone nearly a week he sank deeper into a disturbed state. After somewhat calming down Travis told his family a story that would tell countless times to investigators, skeptics, and in his book.

Travis claims that he recalls the beam of light from the strange unidentified craft beaming through his body. He claims to have then blacked out, only to awaken sitting in a reclining chair with a bright light shining above him.

Travis says that at first he was not frightened as he assumed he was in a regular hospital room. Travis’ complete senses slowly returned to him at which he point he realized that he was not alone in the room. Gathered around him were very strange humanoid creatures in orange jump suits. Travis description of the creatures matched the popular conception of aliens known as greys.

Travis mentioned how his whole body ached and he was having trouble breathing, but was terrified at the sight of these strange beings. Travis’ leapt from his chair and demanded that the creatures get away from him. Travis grabbed a cylindrical tube that he thought was made of glass and attempted to bust over a near by surface in an attempt to make a makeshift knife, but the alien material would not bust. Instead Travis used it as a weapon swinging it at the creatures. His display of aggression apparently worked as the group of greys left the room.

Travis then ventured out of the room and into a hallway. The hallway led to another strange room. In the center of the dome like room was a single chair. Travis’ curiosity got the best of him and he sat in the chair, upon sitting stars and galaxies were projected on the ceiling.

Travis compared this to visiting a planetarium and seeing stars projected on the ceiling. Travis began manipulating a joystick like leaver on the left arm of the chair. When he did this the stars would slowly rotate around him. Travis decided to get up from the chair and go back down the hall to investigate a rectangular spot in the wall he had seen that he now thought might have been a door. Suddenly, Travis heard a noise from behind him.

He turned around and was relieved to see a human. Travis says there was something strange about the man. He was wearing a blue jump suit and a strange glass helmet. He also had abnormally large eyes that were gold, but he was still human so Travis trusted him.

Travis began bombarding the man with questions but was ignored. The man only motioned Travis to follow him and grin. The due went through the “hangar” of the aircraft where small saucer-like crafts were stored. The man then led Travis to another room that contained three other humans. Travis was seated at a table among the other humans where he claims one of them put an oxygen type mask over his face and he again blacked out. When he awoke he was in the phone booth.

Travis’ brother, Duane, decided not to tell anyone of Travis’ return for fear of causing a media firestorm. Duane also remembered an Ufologist named William H. Spaulding who promised that if Travis returned he would set up a confidential medical exam for him.

Duane took Spaulding up on his offer only to discover that the doctor Spaulding lined up for Travis was not a medical doctor but a hypnotherapist. This upset Duane and caused him to get into a verbal altercation with Spaulding. Duane and Travis left the office without getting the exam. From that day on Spaulding would become one of the many ufologists trying to disprove the case.

Also, Duane’s decision not to immediately inform authorities of Travis’ return has led many to speculate that he and Travis used this time to dispose of evidence that may prove Travis’ abduction was a hoax.

Journalist Phillip J. Klass is the main proponent in debunking this abduction. He claims that Travis and the entire logging crew had a financial motivation for faking the abduction. He believes that the crew were trying to get out of there logging contract by evoking the “act of god” clause in their contract so as to not take a financial hit, because the job was impossible to do in the given time. Others are quick to point out though that defaulting on a logging contract is not that big of a financial catastrophe as it happens all the time.

Travis did write a book and make money off the abduction, but whether or not this is a motivation for a hoax is unclear. Travis Walton remained in Snowflake after the incident where he eventual became a foreman at a local lumber mill. Travis still periodically makes appearances at UFO conventions and does interviews for documentaries.

UFOs and Aliens: What the Government Really Knows