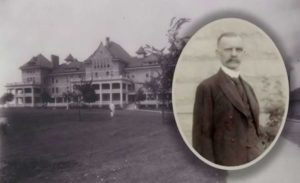 If spirits are actually the personalities of those who once lived and refused to cross over to the other side at the moment of death, then wouldn’t these spirits reflect the turmoil of that former life? And if hauntings are the residual effects of trauma being imprinted on the atmosphere of a location, then wouldn’t places where terror and insanity were commonplace be especially prone to these hauntings?

If either of these questions can be answered in the affirmative, then this might explain the strange events that have plagued the old State Mental Hospital in Bartonville for many years. In its final years of operations, after the last of the patients had departed, staff members in the building started to report some odd occurrences. After they left, the building became the site of frequent excursions by vandals, trespassers and curiosity-seekers, many of whom have had their own encounters in the place.

But there is a long history behind this sad and forlorn place, a history that is filled with social and medical reform, insanity and yes, even ghosts.

Construction on the first buildings here actually began in 1885 and were completed in 1887. The hospital, when completed, resembled a medieval castle with battlements and turrets. It was a foreboding structure and one not fit for the kind of progressive medicine that was planned for it. Despite the huge costs involved in building it, it was never used and was torn down in 1897.

The reason for the demolition was given as structural and design flaws. According to early reports, the castle-like building had been constructed over an abandoned coal mine and wide cracks were beginning to appear in the walls. The decay was believed to be caused by the collapsing of the old mine shafts.

In 1902, the hospital would reopen with Dr. George A. Zeller, a pioneer in mental health, at the helm. The new hospital implemented the “cottage system” and 33 different buildings were used to house patients. There was also a nurse’s home, a store, a power house, and a domestic building with a laundry, bakery and kitchen. Zeller also implemented a system with no window bars or restraints, something that was unheard of in those days.

Dr. Zeller also realized that a system was needed for the burial of the dead at the hospital. He decided that the asylum would take care of the burials of the unclaimed, but that all other deceased persons would be shipped home to their relatives. The hospital’s burial ground eventually grew to include four cemeteries, which were located behind the main buildings.

The older cemeteries are marked with stones that only bear numbers, as many of the patients came there without names. The newer cemeteries have stones bearing names, birth and death dates, and patient numbers upon them. The oldest cemetery here would mark the location of the very first ghost story to be associated with the hospital. But this is no mere folk legend or rumor, this was a documented account of a supernatural event…. and the teller of the tale was none other than Dr. George Zeller himself!

Shortly after taking over the hospital, Dr. Zeller created a burial corps to deal with the disposal of those who passed away while in care of the hospital. The corps consisted of a staff member of the hospital and a half-dozen of the patients. While these men were still disturbed, all of them were competent enough to take part in the digging of the graves.

Of all of the gravediggers, the most unusual man, according to Dr. Zeller, was a fellow called A. Bookbinder. The man was completely mute so no one knew his real name. Apparently, the man had suffered a breakdown while working in a printing house, possibly in Chicago, and his mental illness had left him incapable of coherent speech. The officer who had taken him into custody merely wrote in his report that the man had been employed as “a bookbinder”. A court clerk listed this as the man’s name and he was sent to the hospital as A. Bookbinder.

Dr. Zeller described the man as being strong and healthy, although completely uncommunicative. Soon, the attendants enlisted him to assist in the burial corps. Strangely, “Old Book” as he began to be called was especially suited to the work.

Ordinarily, when the coffin was being lowered, the gravediggers would stand back out of the way and wait silently for the funeral to end. At that point, they would set to filling the grave. Nearly every single patient at the hospital was a stranger and unknown to the staff, so the funeral services were mainly done out of respect, rather than because of personal attachment to the deceased.

Because of this, everyone was a little surprised when, at his first internment, Old Book proceeded to remove his cap, wipe his eyes and begin weeping loudly for the patient who had died. He would do the same thing at each service…. first his sleeve would be used to wipe away his tears and then he would walk over and lean against the old elm that stood in the center of the cemetery and begin sobbing loudly. This tree, where Book would give vent to his grief, was known as the “Graveyard Elm”. It was a massive old tree which had been standing for many years.

Time passed and eventually, Old Book too passed away. Word spread among the employees and as Book was well-liked, and noted for his peculiarities, everyone decided they would attend his funeral. Dr. Zeller wrote that more than 100 uniformed nurses attended, along with the male staff members and several hundred of the patients.

Dr. Zeller officiated the service. Old Book’s casket was placed on two cross beams above his empty grave and four men stood by to lower it into the ground at the end of the service. Dr. Zeller wrote, “Just as the choir finished the last lines of ‘Rock of Ages’, the men grasped the ropes, stooped forward, and with a powerful, muscular effort, prepared to lift the coffin, in order to permit the removal of the crossbeams and allow it to gently descend into the grave. “At a given signal, they heaved away the ropes and the next instant, all four lay on their backs. For the coffin, instead of offering resistance, bounded into the air like an eggshell, as if it were empty!”

Needless to say, the spectators were a little shocked at this turn of events and the nurses were to said to have shrieked, half of them running away and the other half coming closer to the grave to see what was going on.

“In the midst of the commotion,” Dr. Zeller continued, “a wailing voice was heard and every eye turned toward the Graveyard Elm whence it emanated. Every man and woman stood transfixed, for there, just as had always been the case, stood Old Book, weeping and moaning with an earnestness that out-rivaled anything he had ever shown before.

After a few moments of this, Dr. Zeller summoned some men to remove the lid of the coffin, convinced that Old Book could not be inside of it. The lid was lifted and as soon as it was, the wailing sound completely stopped. Inside of the coffin lay the body of Old Book…. unquestionably dead. It was said that every eye looked upon the still corpse and then over to the Graveyard Elm. The apparition had vanished.

A few days later, the Graveyard Elm mysteriously began to wither and die. In spite of efforts to save it, the tree declined over the next year until it was completely dead. Later, after the dead limbs had dropped, workmen tried to remove the rest of the tree, but stopped working after the first cut of the ax caused the tree to emanate an “agonized, despairing cry of pain”.

After that, Dr. Zeller suggested the tree be burned, however as soon as the flames started around the tree’s base, the workers quickly put them out. They later told Zeller that they heard a sobbing and crying sound coming from it.

“Today, Old Book’s grave remains without headstone or monument,” Dr. Zeller wrote about his shared experience. “But if anyone asks where he is, those of us in the know point with a shudder to the remains of the Graveyard Elm.”

After the death of Dr. Zeller, the hospital remained in continuous use for many more years, adding buildings, patients and care facilities for children and tuberculosis patients. The institution finally closed down in 1972 and remained mostly empty for a number of years.

In 1980, it was sold off at auction to anyone who would tear down the empty buildings but it soon became the property of the bank again when the buyer declared bankruptcy. The remaining hospital buildings are today the property of Winsley Durand Jr., who hopes to convert the place into office space. It is private property and trespassers are not allowed. 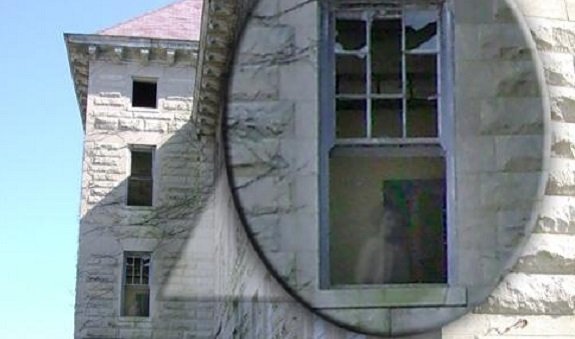 Even though trespassing is discouraged at the old hospital, it hasn’t stopped vandals and would-be ghost hunters from going inside the place over the last three decades. Although many of these people have been less than kind to the old building, most are not looking to damage the structure… they are looking for ghosts.

As with most abandoned structures of this kind, stories about ghosts and hauntings are common. What derelict dwelling has not been targeted as the local “haunted house” at one time or another? With buildings of this type, once a story gets started, its hard to stop….. except in this case, the stories appear to be true!

In addition to the amateur ghost enthusiasts, the Bartonville hospital is fascinating enough to draw the interest of professional ghost hunters too. Rob Conover is a Pekin ghost researcher who has long been interested in the strange goings-on at the old asylum.

Rob is a former Marine and private investigator, who turned to ghost research a few years back to indulge his curiosity for the unknown. Besides appearing on Peoria area television programs, and in local newspapers, he has also appeared on a number of national programs about ghosts and the supernatural.

His interest in the old hospital dates back several years to his first encounters there, when he ran into an unexplained force which, among other things, refused to allow him to open doors. Also during a visit, an apparition even appeared on video tape when he left a camera running in an abandoned corridor. “I have been out there dozens of times,” Rob told me, “and I have never been disappointed yet. They never let me down.”

So is the old hospital really haunted? Scores of people who have visited the place certainly think so, including experienced investigator Rob Conover. It certainly has more than enough opportunity to be haunted, even excluding the story of A. Bookbinder and the haunted tree.

The atmosphere of the place alone is more than enough to justify the reports of the apparitions and strange energy encountered there. The residual impressions of the past would certainly be strong in a building where mentally ill people were housed and where “psychic” disturbances would be common. There is also the matter of conscious spirits.

Hospitals have long been places where the spirits of the dead are said to linger. Besides that, according to Conover, the hospital was the only home that many of the patients knew and they are going to stay where they are the most comfortable.

Author: Troy Taylor, who is a supernatural historian, murder buff and the author of almost 90 books on ghosts, hauntings, history, crime and the unexplained in America. Check his Books on Amazon here.