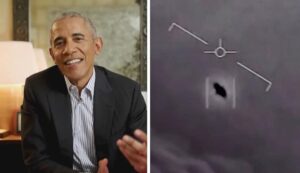 Former President Barack Obama on Monday offered a blunt assessment of the videos of unidentified aerial phenomenon that have continued to gain attention in the United States.

“What is true, and I’m actually being serious here, is that there is footage and records of objects in the skies that we don’t know exactly what they are,” he said.

Reggie Watts, the programme’s bandleader, asked Obama whether he had any theories or information about UFOs. A former Navy pilot recently broached the topic in a 60 Minutes interview which aired on Sunday.

“When it comes to aliens, there are things I just can’t tell you on air,” Obama said.

Then he added: “The truth is that when I came into office, I asked. I was like, ‘Is there a lab somewhere where we’re keeping the alien specimens and space ships?’

“They did a little bit of research and the answer is no.”

The U.S. Navy has for years confirmed the legitimacy of videos from jet fighters that tracked unidentified objects, some of which moved in ways that aeronautics experts have struggled to explain.

“We can’t explain how they move, their trajectory. They did not have an easily explainable pattern. I think people still take seriously [the task of] trying to investigate and figure out what that is. But I have nothing to report to you today”, said Obama.

This is not the first time former presidents have spoken on late night tv about UFOs.

In December 2020, Barack Obama answered a variety of unusual questions from late night talk show host Stephen Colbert. One of those questions was about UFOs.

More recently, former President George W. Bush talked with Jimmy Kimmel about UFOs. Kimmel showed Mr. Bush the night vision video filmmaker Jeremy Corbell published. Kimmel then asked if the former president would be surprised if we were visited by creatures from another planet.

A glowing UFO flew out of a mysterious red cloud