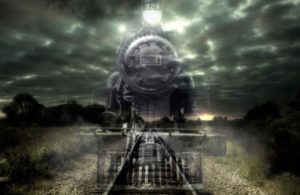 Along the old Baltimore and Ohio Railroad, in and around the small town of Republic, is the site of one of Ohio’s first documented hauntings. A ghost train repeatedly travels its ill-fated route, and the guardian spirit warns too late of a fatal disaster that occurred more than a century ago.

The terrible disaster on the Baltimore and Ohio Railway near Republic, O., a little after two o’clock on the cold evening of January 10, 1887, was caused by a freight train running upon the time of the passenger express on the main line.

This freight train, under Conductor Fletcher, left Tiffin, east-bound, at one o’clock in the, morning. It was side-tracked at Scipio to allow the east-bound express to pass, then proceeded towards Republic, which station it was expected to reach before the arrival of the fast express from the opposite direction.

This was at half-past one, and the fast express from the east was due at Republic at two. The distance was only about five miles. The weather was intensely cold. The engineer and fireman apparently either neglected or did not understand their business, for they could barely keep up steam in the locomotive.

Finally, at half a mile west of Republic, the engine stopped entirely. Here Conductor Fletcher made a fatal mistake. It was his duty to send a signal to the front with the utmost dispatch, but he waited till the train came to a dead stop, and then started forward with the lantern.

At this point, there is a sharp curve, and Fletcher had not gone more than the length of twenty cars when he saw the headlight of the approaching express rounding the curve no more than forty rods away, and running at sixty-three miles an hour.

The headlight of the freight was not two hundred yards ahead of him, but he whistled down brakes, reversed his engine, and jumped for his life, crashing through the window of the cab and carrying glass and sash with him. He alighted in a heavy snowdrift, and escaped almost unhurt.

Before jumping he had shouted a warning to his fireman, William Fredericks, who was stoking at the time. The fireman arose to leap, but was too late, and two iron beams caught him at the hips, crushing him, and holding him ten feet in the air, where he was suspended until death came to his relief, three hours later.

So great was the force of the collision that both engines arose on end in the air and then fell interlocked fast together. The mail and baggage cars were jammed up on the tender, the express car telescoped the baggage car, and the smoker crushed into the express car nearly its whole length.

The two sleepers did not leave the track, and were uncoupled at once and pushed back from the fire, which burst out almost instantly from the fatal car-stoves. All the rest of the passenger train burned, and when daylight dawned nothing was left of it but a few hot wheels and rods.

There were fourteen or fifteen persons in the smoking-car, very few of whom are known to have escaped. The rest perished in the flames and their bodies were burned to unrecognizable masses.

Among those who perished in the smoker was a man named Joseph Postlethwaite, aged fifty-seven, and his two sons, Spencer and Henry, aged respectively eighteen and eleven. He was on his way to Chillicothe, Mo., near which place he had a brother living.

He came from New Martinsville, West Va., where he had just sold a farm. He had the proceeds of the sale in his pocket, and the money, amounting to $1,500, was burned. His wife and three small children, who were in the other car, and were saved, were left penniless.

It is impossible to ascertain how many persons perished in the wreck. Nine bodies were recovered burned to a crisp, and besides there are detached remains and fragments.

Since the disaster, a “ghost train” has been witnessed in and near Republic. Its lights glow in the night as it races along the tracks and over the trestle, reenacting the events leading up to the accident.

Reports of another haunting came just weeks after the accident. As reported in a Tiffin newspaper article on March 4, 1887, train workers repeatedly witnessed a ghost at the scene of the disaster:

“Before stopping, both the engineer and fireman noticed that the light appeared to be carried by a woman wearing white. Puzzled by the disappearance of the signal, the conductor walked over the track for some distance ahead, but could discover nothing.”