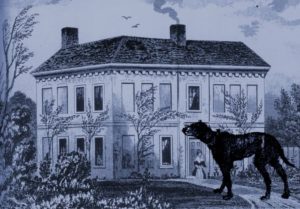 Major Robert Steuart inherited Ballechin House in 1834. He was stationed in India and rented the house out. He retired in 1850, returned to Scotland and moved into the mansion after his tenants left. He loved dogs and owned many.

The Major believed in reincarnation and transmigration of the soul, living a reincarnated life as an animal. His desire and promise were, after his death, to return to Ballechin and live in the body of his favorite black spaniel.

The Major had been severely injured and limped. He was a childless bachelor and lived with his housekeeper, Sarah, which made people wonder about their relationship.

One of his relatives, Isabella, was a nun who lived in a convent. According to the Major’s will his second eldest nephew, John, inherited Ballechin after his 1976 death. John allowed nuns to use a cottage on the grounds as a retreat.

After the Major’s death, the house was inherited by his nephew John Skinner who assumed the name Steuart. Fearing that his uncle would reincarnate in the form of one of his dogs, the new owner reportedly shot them all.

From this story came the legend that Robert Steuart was forced to haunt the house as a disembodied spirit. The first reported haunting at the house took place in 1876; the witness was a maid in the house.

Soon happenings of a supernatural nature began. There were sounds like explosions and people arguing, knockings, rappings, animals, heavy breathing, bedclothes being torn off and gelid coldness, poltergeist activity. The dog, monk, nun, grey lady, Steuart and other phantoms were seen and/or heard.

John’s wife was in the study and felt overpowered by the smell of dogs. She felt an invisible dog push her. The sounds of limping footsteps were heard in the master bedroom which has been the Major’s and was where Sarah died.

While John and his family lived there for twenty-one years, governesses and servants would not stay.

In 1895, John was talking on the phone before going to London. The talk was interrupted by three loud fierce knockings. Later that day, after John arrived in London, he was killed by a cab. This was believed, by some, to be an ill omen and the family moved from the house.

Ballechin was rented in 1896. The tenants fled in terror soon after they moved in because of experiencing phenomena that terrified them.

Balechine’s reputation as a haunted mansion was more firmly entrenched.

Lord Butte was deeply interested in the paranormal and rented Ballechin. He invited 35 guests to stay overnight, some of whom were members of the Society for Psychical Research.

There was a lot of ghostly activity recorded in addition to those which people had previously witnessed. These included a hunchback, a hand grasping a crucifix, unseen dogs brushing up against people and the sounds of their tails slapping objects and a weeping woman.

One of the investigators who brought her dog along with her was wakened by its whimpering. She looked toward where the dog was staring and saw two detached dog’s paw on a bedside table.

The newspaper ran an article about the accounts the investigators recorded. An author wrote a book about these, The Alleged Haunting of B-House in 1899.

The Steuarts, reaction against the book was so strong that all real names were excluded, so the hauntings were recorded as “alleged” which damaged the credibility of the witnesses and the events.

Ballechin House was uninhabited by 1932, and most of the house was demolished in 1963, after a fire, leaving only the former servants quarters and outbuildings.

The Story Behind the Ohio’s Bloody Bridge