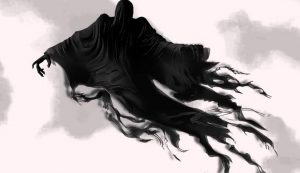 The video below was taken on March 18 this year in the vicinity of the American town of Prescott Valley, Arizona. One of the locals noticed a dark smoky figure with dim humanoid outlines that was relatively low “hovering” above the ground.

When an eyewitness published the resulting footage on the internet, web users began to build various guesses about the nature of this anomaly. One of the most popular hypotheses is that it was an aircraft of representatives of an extraterrestrial civilization.

According to another theory, we have some mysterious flying being. This version, by the way, is also maintained by the author himself, who saw this clot of blackness quite well and believes that the video, unfortunately, does not convey all the subtleties of perception of this anomaly.

“When you see it with your own eyes, it seems that it is something living: it seems to be in contact with you, it affects your feelings, causing a cross between delight and fear…”, – the video author says.

It is noteworthy that Prescott Valley, located in the middle of the desert, is considered to be a place where various inexplicable events and phenomena occur. For example, in August 2017, the water tower disappeared without a trace in just one night from one of the local streets.

A year earlier, about a dozen citizens witnessed the appearance in the evening sky of a huge luminous polygon, resembling a Satanist pentagram.