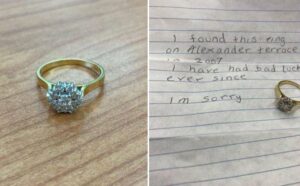 The other day, a post was published on the Facebook page of the Tasmanian police (an island off the coast of Australia), which aroused great curiosity of local residents, who left many comments on it.

The superstitious Australian who found the diamond ring 14 years ago finally turned it over to the police after he came to the conclusion that the ring began to bring him bad luck.

The ring was mailed to Smithton Police Station in the seaside town of Stanley on the northwest coast of Tasmania and arrived there last week.

The precious piece of jewelry with a large round diamond (probably quite expensive) was delivered from an anonymous sender, who only attached a short note to it.

“I found this ring on the Alexander Terrace in 2007. I have had bad luck ever since. Sorry,” the note said. 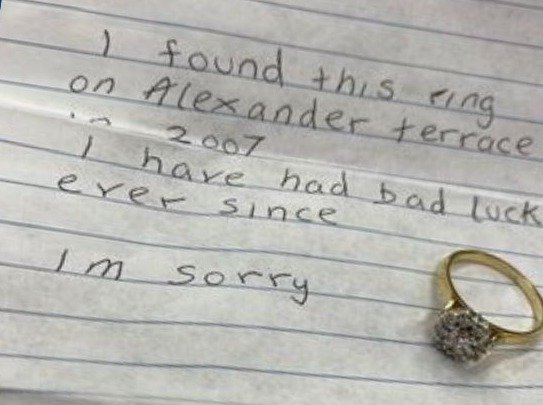 The Smithton police urged the owner of the ring to come forward and take the jewelry, because after the ring was sent, “strange things” began to happen at their police station.

“We would like to return this precious ring to its only true owner, because frankly, since it arrived, strange things have been happening here,” the local police Facebook page wrote.

Unfortunately, no details of “strange things” were provided, but, however, this post already quickly fired the imagination of residents, and many of them shared their theories in the comments.

“Creepy. I wonder where he found it and under what circumstances. I hope the real owner comes forward and fills in the blanks,” one user wrote.

“It looks like my mother’s ring, but she lives in Hobart. And what scares me is that I suddenly saw this post because I haven’t seen my mother and this ring for about ten years,” wrote another.

Other commentators have suggested that the original owner deliberately threw the ring on the Alexander Terrace in order to get rid of his curse.

“Are you sure the owner lost it, not threw it away?” , – commented one user. “I probably would have gotten rid of him after just one year of failure, rather than waiting 14 years,” wrote another.