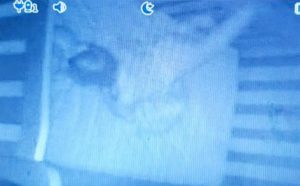 Some time ago, on the Reddit website in the ghost section, a frightening video filmed by a baby monitor was posted.

The monitor was installed above the bed of a 2-year-old boy and filmed how twice at night at 0:20 and at 0:45 something invisible pulls the child by the leg.

In the first case, the boy did not wake up, but the second time the push was obviously much stronger and the child woke up and raised his head, after which he again fell asleep.

At the same time, a white orb ball flies over the baby’s crib all the time during recording and it moves in such a way that it does not look like the movement of a spider or other insect.

“I’m 96% sure that we filmed a ghost,” the author of the video writes.

Commentators agreed that it all looked creepy. But not everyone thinks that the ghost threatened the child.

“Perhaps he was trying to flip it on his back, the child on the video was sleeping face down, he could suffocate,” one user wrote.

“This is the most convincing ghost video I’ve seen. Phenomenally!”, writes another commentator.