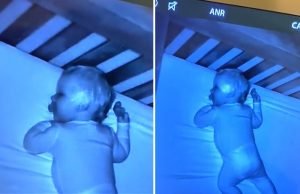 On the screen of the baby monitor, the woman saw a strange phenomenon. Something faint and gently glowing, moving smoothly around the head of her little child, lying in his crib in the nursery.

“I saw his spirit soothe our baby – the one he never met,” Allen wrote.

In the video, Whitney holds a baby monitor in one hand while recording the screen with the other. In the crib lies her 3-month-old son Leo, who, it would seem, is fast asleep, and an incomprehensible light clot gently moves next to his head.

An incomprehensible clot becomes a bit like a translucent human hand, which gently strokes the baby on the head.

For a moment, the child’s eyes open slightly, but as the light clot continues to move slowly over his head, he falls asleep again.

“The veil is thin,” Whitney writes, referring to the veil that some believe exists between the worlds of the living and the dead.

Whitney’s husband, Ryan, died at the age of 35 after a severe allergic reaction to a bee sting. His heart stopped for over 20 minutes, resulting in an anoxic head injury.

Ryan died slowly over the course of 6 months, undergoing numerous medical procedures and hospitalizations, but ended up in a hospice as the doctors could no longer help him. When Ryan passed away, he left behind his 3-year-old son, Jackson, and his wife, Whitney, who was pregnant with their second son.

In the comments to this video, users shared their theories regarding the likely ghost, and also expressed their gratitude to Whitney for posting the video.

“This is the most amazing thing I’ve ever seen. Thank you for this,” wrote one user in the comments.

“I’m telling you right now this is your husband. Oh my god… now he’s his guardian angel. Your son is divinely protected,” wrote another user.

“The fact that the baby opens his eyes, he also feels his dad…” commented another user.