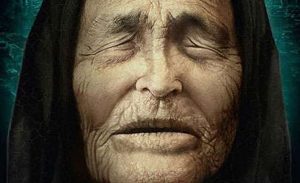 Baba Vanga (31 January 1911 – 11 August 1996) was a blind Bulgarian mystic, clairvoyant, and herbalist who spent most of her life in the Rupite area in the Kozhuh mountains, Bulgaria. Millions of people around the world were convinced that she possessed paranormal abilities.

In her childhood, Vangelia was an ordinary girl with blue eyes and blond hair. Vanga was intelligent. Her inclinations started to show up when she herself thought out games and loved playing “healing” – she prescribed some herbs to her friends, who pretended to be ill.

A turning point in her life was a tornado which lifted Vanga up and threw her in the field (this claim has not been verified with meteorological records or other accounts from that time). She was found after a long search–very frightened, and her eyes were covered with sand and dust, so she couldn’t open them because of the pain. No healing gave results. There was money only for a partial operation, so her eyesight was failing.

Vanga was illiterate or semi-literate. She did not write any books herself. What she said or allegedly said had been captured by staff members. Later numerous esoteric books on Vanga’s life and predictions were written.

Vanga claimed that her extraordinary abilities had something to do with the presence of invisible creatures, but she could not clearly explain their origin. She said that those creatures gave her information about people, which she could not transmit to them, because distance and time didn’t matter. According to Vanga, the life of everyone standing in front of her was like a film to her from birth until death. But changing “what was written on the generation” was beyond her power.

Sources such as “Wiesler Field Guide to the Paranormal” claim that she foretold the break-up of the Soviet Union, the Chernobyl disaster, the date of Stalin’s death, the sinking of the Russian submarine Kursk, the September 11 attacks and Topalov’s victory in the world chess tournament.

Vanga attempted to prophesy about newborn or unborn children. She said that she was “seeing” and “talking” to people, who had died hundreds of years ago. Vanga talked about the future, although she did not like to. In her words, in 200 years man will make contact with brothers in mind from other worlds. She said that many aliens have been living on the earth for years. They came from the planet, which in their language is called Vamfim.

Followers of Vanga believe that she predicted the precise date of her own death, dreaming that she would die on 11 August, and be buried on 13 August. Shortly before that she had said that a ten-year-old blind girl living in France was to inherit her gift, and that people would soon hear about her.

Apart from prophesying, Vanga was believed to be a healer, but only through herbal medicines. According to her, people had to heal themselves only with herbs from the country they live in. She prescribed washing with an infusion of herbs and spices, claiming some beneficial effect on the skin. Vanga did not oppose mainstream medicine, although she thought that taking too much medicines is bad, because “they close the doors, through which nature restores the balance in the body with herbs.”

Accounts on the predictions of Vanga are often controversial and distorted by the media. One recent attempt to systematically summarize the existing knowledge about Vanga was made in the documentary “Vanga. The visible and invisible world”.[16][24] The movie includes interviews with some of the people who met Vanga in person, including Sergey Medvedev (press secretary to President of Russia Boris Yeltsin in 1995–96; Sergey Medvedev visited Vanga as Yeltsin’s envoy following Vanga’s request to meet her), Neshka Robeva (Bulgarian rhythmic gymnast and coach), Sergey Mikhalkov (Soviet and Russian writer, author of the Soviet Union anthem), Nevena Tosheva (director of the first documentary about Vanga), Kirsan Ilyumzhinov (Kalmyk multi-millionaire businessman and politician). According to the documentary, Baba Vanga predicted Yeltsin’s second electoral victory in 1995, and warned him about his heart condition.

Several researchers have studied the phenomenon of Vanga in the attempt to establish whether she has any extraordinary capabilities. One of the first studies was initiated by the Bulgarian government and is described in the 1977 movie Fenomen directed by Nevena Tosheva. Prominent Bulgarian psychiatrists Nicola Shipkovensky and Georgi Lozanov also studied the capabilities of Vanga. Reportedly, some of the studies concluded that about 80% of predictions of Vanga turned out to be accurate.

Vanga died on 11 August 1996 from breast cancer. Her funeral attracted large crowds, including many dignitaries.Fulfilling Vanga’s last will and testament, her Petrich house was turned into a museum, which opened its doors for visitors on 5 May 2008.